Sunday morning, and as I picked disconsolately at my Premier Inn breakfast with the worst hangover for years (well, weeks), I'd learnt the lessons of Saturday and needed some fresh air and a slower day.  So after downing as many tiny glasses of orange juice as seemed socially acceptable, I was on a train out west to Kintbury.....

My GBG App told me it was 2.3 miles to Inkpen, not too bad but half an hour later, I realised this was an "as the crow flies" calculation and the distance had gone up to 2.5 miles!  Oh well, great weather, beautiful scenery and quiet roads made for a good de-tox session. 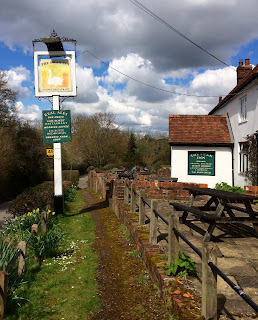 Rural was not the word - this was one of those ultra remote pubs though I do believe it has the odd bus during the week.  Not on a Sunday obviously.  I was sweating by this stage so I'd already decided to sit outside on the bench you can see in the above picture.  The staff were two young females (possibly Eastern European) who looked at me suspiciously from behind the curtains.  One brightened up when I paid for my pint of Butts Organic Jester in twenty pence pieces, they like change in these parts.  The other carried on looking like something from a bleak Scandinavian crime drama.  Despite the pubs olde worlde feel, it had a restaurant area to the right and an anxious looking Mum to the left, where her child was using the ramp down to the toilets as a diving board.  The loo door had a great stained glass swan but I forgot to take a photo.  A family of bikers were on the other bench, they also had kids with a deathwish, seemingly determined to cycle into oblivion at any given opportunity.  The ale was traditional and most welcome after the trek, and in the sunshine, this was one of the more serene sessions during my Berkshire holiday.

Sadly, I had to be ultra strict with my 27.5 minute "minimum pub time rule"because the GBG said my next place closed at 3pm, and being 3 miles from Hungerford, it was a race against time to get there before they called afternoon last orders.....

The walk was straightforward and I found my way to the 'village' green where I walked into a parallel community with a barbecue and lots of people stood around being merry. 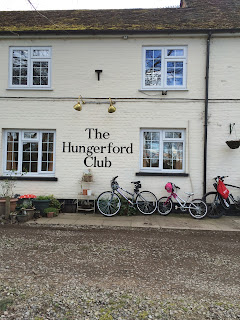 Being a club and having to potentially be "signed in" as a CAMRA member, I couldn't assume anything, so in the most pathetic voice I could muster, I asked if I could come in and have a pint of their London Pride?   "Of course ya can luvvie!" came the reply from Mags, former steward of the club wearing a superb owl jumper, who I think thought she was still in charge unofficially.  I was asked to sign a guest book to complete the formalities, Yorkshire clubs never do this (far too relaxed/lazy) but it's nice to have my name attached to such a great friendly place as this.  It just seemed like a festival of fun throughout, I didn't even mind the kids running about, or the Dad's in tight cycling shorts, though I declined the offer of a barbecue sausage.  Mags invited me to sit with them, and soon I was chatting to locals like Louisa and Johnny about women's jugs and Hertfordshire and BRAPA (obviously), I was asked if I had taken any photos - it seems CAMRA and cameras had been mistaken!    A man from Cheshire was very excited about my BRAPA challenge, but he seemed disappointed I hadn't been pub ticking in Warrington and that his fave pubs weren't in the GBG.  The beer was top quality and with the exception of the ghost of Charles Dickens and his wife, everyone was having a whale of a time.  Sadly, BRAPA stops for no one so I had to move on.  Friendliest place ever.  Oh, and so much for it closing at 3pm! 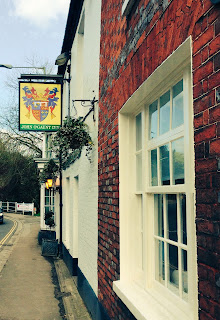 In the club, they'd told me that whilst this was a great pub, it wouldn't be as friendly (well, nowhere could be) and the landlord was a little bit of a 'character' (shall we say, being discreet).  Whatever the truth, he runs a good pub.  Firstly, the ales - from the local Innformal brewery were very nice, I drank a stout brewed up the road in Wickham (more on that later).  The pub, a bit like the Bunk in Curridge, had a cosy bare boarded shell of an old building, but quite a lot of modernisation going on.  At least it was multi roomed (of sorts) so I sat in a sunny window where the embers of a fire were going out.  The other reason I approve of the landlord was the staff, all gorgeous young brunettes (apart from the token sulky blonde, but you have to roll with the punches) - the 'crumb cleaner' even stopped to chat with me on BRAPA, and then a perky Scottish thing asked if I wanted another drink - table service at it's best, hurrah, all very North Bar in Leeds.  The pub had a nice woody smell as the fire fizzled out, and folk who'd stayed for a post lunch drink all departed.  I tried ringing FIVE taxi companies to get me up to Wickham to try the second Innformal pub, but each had their own unique excuse so I cut my losses and trained it back to Reading.  Good pub this.

Hungerford had truly been a great place, but Reading was really impressing me as a town too, though as I walked out south through studentsville, it all got a little bit more 'real'....

Sir Quinno was waiting as I arrived at the Queen's Head, I'd been expecting some little spit n sawdust backstreet local full of grubby old men rubbing their hands together, so was surprised to see a modernised loungey place with lots of peculiar artefacts, mainly oriental, and Sir Quinno (being the font/fount of all knowledge/wisdom of all things pubby in Reading) told me they had the Thai food to match.  No denying it had a nice friendly welcome and some good ales on, to a non Berkshire ale connoisseur like me anyway, I had summat from Hampshire and was amazed just how many Hampshire beers I saw over the weekend, though I guess you could chant "you're so southern, you're practically Hants" and just about get away with it.  Decent enough pub, but not sure if I lived in Reading I'd walk the mile south from town too regularly when you have so much other competition in the centre, just didn't leave enough of an impression on me.

We then walked back towards town where Quinno showed me a recently shut pub that appeared in the first  'Fly on the Wall' documentary "the Family" (from 1974) - they used to come to said pub to get pissed.  I went to get some supermarket snacks where I learnt a recurring theme of my holiday - no one in Reading trusts a self service checkout.

I'd been looking forward to visiting here for some time now, and am delighted to say it didn't disappoint.  Knowing the S.S. (Hull City's Southern Supporters) drink here, it's been so far impossible to contemplate coming here on a match day.  First thing that struck me, the red carpet - I love a red carpet in a pub, in fact they should really lay one out for me at all times(!)  Makes it so cosy.  Then you have Hopback beers, great brewery - we both got Citra.  Never been to a Hopback pub before, and if one more person says "but surely you've been to Salisbury??" I'm gonna scream cos no I bloody haven't ok!  Why would I, does Wiltshire begin with a "B", no it doesn't! (Sorry, rant over)  Then, Quinno showed me how to play Bar Billiards.  It is big business in York at the moment, the players of pubs like the Woolpack even have trophy wives and sports cars and you have to be silent when they take a shot.  Because Reading has fewer pretentious nob-heads than York, it is played in the way god intended - by jolly blokes with a smile and a sense of humour, like a traditional pub game should be (sorry, second rant over).  I was terrible, too many rules to remember, and think I lost about 2,000 - 300 in the end!  But it was fun.  The pub also had lots of old beer guides on the shelves, another good sign.  We then sat at the bar and had a night cap - Crop Circle for me, Summer Lightning for Quinno cos he's hardcore.  Another Reading theme was evident, everyone loving Spurs and thinking that cos Leicester failed to win one game, they've blown their title chances!  We'll see.  Loved this pub, loved the pub session.

And that drew the curtain on day two, and looking back, this was my favourite of my four days.  I even remembered who I was when I returned to my Premier Inn for a late night snack and wondered why they don't knock down the Crucible in Sheffield and make them all play Bar Billiards in Reading instead, but don't get Ronnie on the Summer Lightning, he's enough of a twat already.

I'll be back with a day 3 report hopefully on Sunday, but first I have a Manchester Punk Festival to negotiate.

Si (I love snooker really before anyone complains).