Five pubs into my first day back in Berks and still only early Saturday afternoon.  What could possibly go wrong?

The sensible thing to do from here would be head back to Reading, do my one remaining pub there, buy a nice bag of food and watery drinks, check in at my Premier Inn, watch some TV and have an early night, all fresh and hangover free to start ticking again on the Sunday.

But you don't read BRAPA for sensible content.  And with Sir Quinno acting as the devil on my left shoulder egging me on, like I don't have a mind of my own, there was inevitably plenty more pubs to come.

As our train left Windsor in a vague Reading direction involving a change at Slough, we stop (to my immense surprise) at Maidenhead.

The lure of Maidenhead simply proved too strong (SAID NO ONE EVER).  I require two ticks, not to mention a pre-emptive, not to mention one close by at Pinkneys Green, a stride out from Furze Platt.  I'd scheduled this in for Monday originally, but you know how plans are, like my bladder, very fluid. 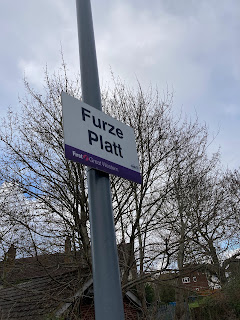 An arduous slightly uphill 26 minute walk followed.  When we reached the pub, Quinno noted little signs of life.  "Photo first, then we'll investigate.  It'll be fine" I assured him ...... 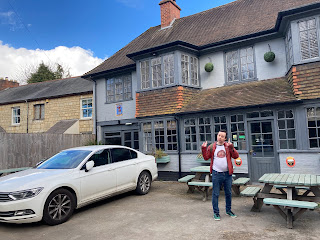 But it wasn't fine.  SHUT PUB ALERT Boundary Arms, Pinkney Green.  I apologised.  I'd relied solely on Google hours being correct for this one.  But a better pub ticker than me will tell you that you should only use Google in conjunction with Facebook and Whatpub, which would've told me the truth.

I clawed it back a bit by managing to book an Uber who was happily just passing the end of the road, I barely even had chance to wee in the woodland opposite before he showed up.

And the consolation was that the pub never looked like being one you'd walk away from saying "I tell yer what matey, that's one to rival the Bell at Aldworth, make no mistake.  Kind of like the Peveril of the Peak in Manchester too, with a touch a York's Bluebell and Preston's Black Horse eh matey".

This should've been what they call a 'sobering experience'.  Sadly, it wasn't as my memories are slightly hazy as the friendly taxi chap drops us back in Maidenhead's 'burbs....... The award winning Craufurd Arms, Maidenhead (2146 / 3709) was excellent for the first three minutes.  As we walk in, a very homely atmosphere greets us, a bloke starts chatting, Quinno strokes a dog, and two fabulous barmaids pull the ales through from Marlow (a town beginning with 'Ma' which upsets me more than Maidenhead) Rebellion brewery.  The pump clips are even dedicated to Sir and Lady Craufurd, and you don't see a lot of that.  Problem is, it all starts to unravel as soon as we sit down.  Not only is the pub 'decorated' in an echoey Fungus the Bogeyman pale green/white sanitorium kinda way, the ale isn't that great and I seem to remember Quinno even took his back (or at least asked for a go of something different).  The IPA I was on was passable.  The people were certainly deserving of a carpet, a pub cat, roaring fire and settle, hell the pub food even included local butchers sausage rolls says my below photo, so it was a shame the pub had so many shortcomings with regards its 'style' cos it really should've been quite good. 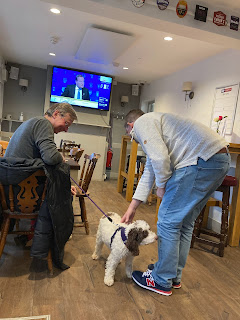 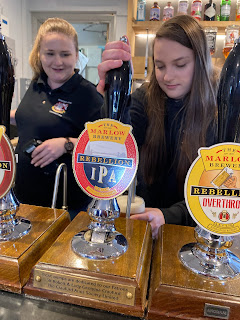 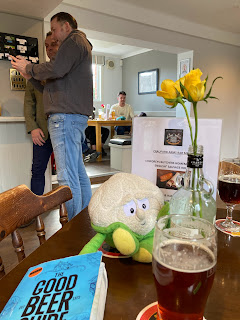 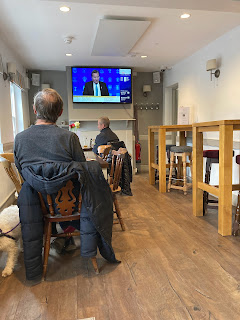 A sixteen minute trek right into the heart of Maidenhead (does it have a heart?) took us to my remaining tick in the town ...... 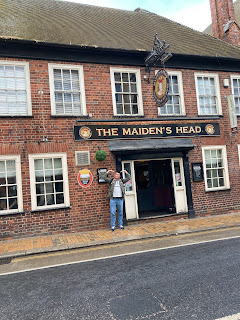 If my photos and Twitter check in enabled me to remember the Craufurd better than I could've expected, the same wasn't true at Maiden's Head, Maidenhead (2147 / 3710).  At least my ONE photo tells me I probably ordered the Stardust Bitter (4%), lighter than the Optic (4.2%), that was the way I'd been selecting ales today, go for the lower percentage!  Not that it was working.  Quinno had told me in the 'build up' that this pub is a safer pair of hands than the Craufurd, and true, I remember the ale being good and it feeling a well run place.  Our deep and emotional Prisoner Cell Block H chat was the highlight for me, and if you see below, it was like SeeTheLizards was a fly on the wall!  I know one pub ticker who'd probably tell you Maidenhead is best visited in the haziest state possible.  I'm not ruling out a return visit within the next five years.  The highly pre-emptive North Star has to be a great shout for a future GBG, and I've STILL not done the Conservative Club where I hope St Theresa will be there to do the greening. 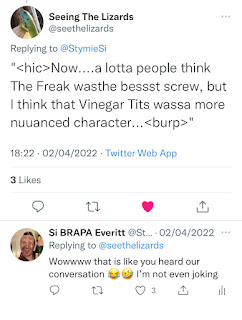 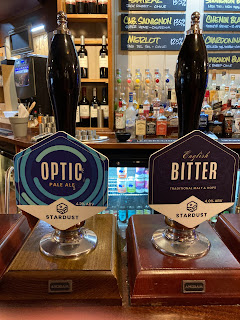 Back on the train to Reading, I tell Quinno "I'll do one out of Reading and Caversham and then call it a night".  Who was I kidding?

We took the bus from the station out towards the Whiteknights University campus where my one remaining Reading tick was lurking.

As we sat on the top deck, you could really admire how Reading has improved leaps and bounds from the grey scuzz infested shit tip arse gaping death hole I first encountered in Feb 2005.  Really fond of the place now, no wonder they (me) calls it the Cape Verde of Berkshire ...... I've never been to Cape Verde but I can't think of a bigger compliment.  They should put this paragraph in a Reading tourist guide. 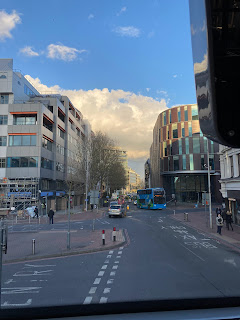 The Uni grounds are glorious, lovely green spaces, and fabulous old buildings.  A pleasure to be taken on what, for Quinno, was a trip down memory lane.  "I may be biased ...." he says, but nope, this was exceptional Uni grounds action, and I was having a moment of clarity, having left my haziness back in Maidenhead.

Always a delight to attempt one of the more unique GBG ticks, having recently missed out on Liverpool's Augustus John and seen that Lancaster's Uni bar looks closed beyond all hope.  Quinno tells me it is he who is responsible for its inclusion, having put the other local CAMRA folk onto it as a place with cracking ale.  And I remember it being 'card only' when that was seen as controversial.  How times have changed. 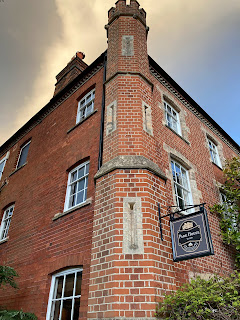 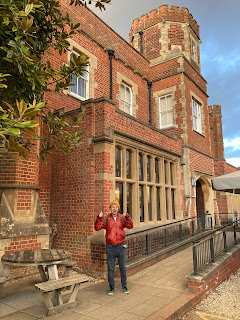 Park House (University of Reading), Reading (2148 / 3711) was a lovely place indoors too, old wood panelling on either side as we made our way left into the bar, the former senior common room no less.  Not sure if the crowd can be described as 'eclectic', but certainly 'varied'.  Students with headphones and laptops were probably to be expected, but kids playing hide n seek, belonging to lecturer parents huddled over large glasses of sherry, sobbing into zombie reimagining's of Jane Austen classics, at least that's how my brain remembers it!  The beer was on top form, not sure if I went Bond Brews or the Siren, both ring a bell.  In fact, I may've had a second (or half) as we seemed to be here a while.  Quinno's friend Chris pops up, nice bloke, very easy to chat to, and Quinno gets a crisp round in wahheyyyy, was that stage of the day.  I'd really had a second wind by now,  and announced 'yes, Caversham, come on, let's do this!'. 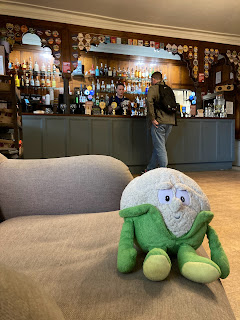 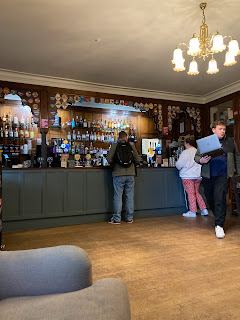 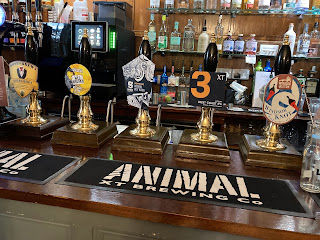 The glorious sunset was rapidly descending into darkness as the three of us (four if you count Col who had been quiet all day but had really hit top form at the business end of the season) bussed it back to the station and then take the walk and over the bridge into what felt like 'far Caversham' but probably only cos I was desperate for the loo ...... 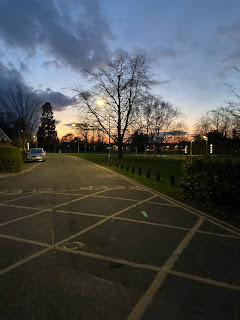 So here we were then, final pub of this epic day was the Griffin, Caversham (2149 / 3712).  I can't tell you a lot about it, it was fairly noisy, fairly busy, had quite an atmosphere but also felt very much a dining pub too.  A GK pub no less, not sure what I drank, they may've had a guest on otherwise I'd have probably gone GK IPA and I definitely wouldn't choose that willingly, even on pub nine.   We had to go back outside for the outdoor photo you see above as we'd forgotten on the way in.  Caversham is traditionally not a BRAPA town I associate with clarity.  In the lovely Fox & Hounds, I fell asleep in the corner.  The landlord saw but didn't mind.  In the Grosvenor, I drew a drunken cartoon man swearing, then rang for a taxi but forgot where I was staying!  So you could say at a push, this was the soberest I've been in Caversham, my Stalybridge of the south. 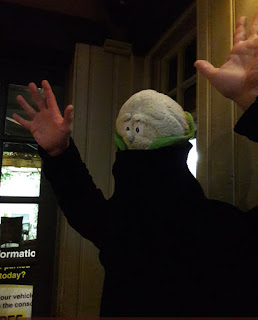 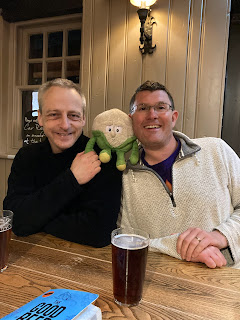 So there we have it, what an epic!  Quinno & Chris patiently wait whilst I grab some late snacks from the local Nisa, and finally get around to checking in at my Premier Inn where she was like "we've been expecting you Mr Everitt".

I may've regretted the day when I woke up at 6am, banging head, dehydrated, but as we'll see in part 4, circumstances mean I'd be glad we'd done as much as we did.

See you sometime next week for part 3, as I am off to my first music festival since 2019 woohoo!  BRAPA pubs in between if I can manage it.