If you read part one, you might be aware that I wasn't having a lovely time in Suffolk, this being my first exclusively BRAPA trip to the county since 23rd Feb 2016.

As well as getting some good Ipswich pubs done that afternoon/evening, none of which are in the current GBG (Briarbank, Brewery Tap, Mulberry Tree, Thomas Wolsey, errrm Margaret Catchpole), that night was also famous for every photo of me looking like my head had been removed, and then re-attached to my body at a slightly weird angle. 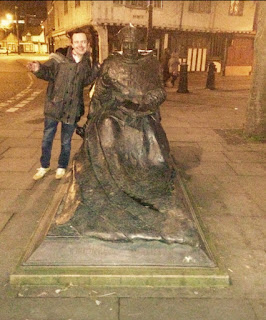 Almost exactly six years on, back to the present we go, and perhaps the first signs that things were looking up was our realisation (especially Daddy BRAPA's) that Woodbridge was one of the most 'delightful places in the UK' with its rows of colourful cottages, and quaint town centre, where our next pub fitted in nicely.

The rains of Eunice weren't abating, the pubs so far hadn't been great, but had been grating, we needed this one to deliver, as I continued to shiver .... 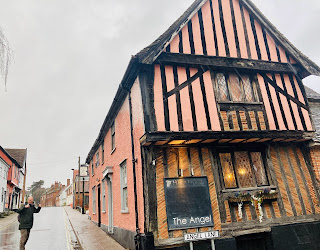 And it did deliver, in this sense that it was an improvement on what had gone before, though that bar was pretty low (excuse the pun).  Angel, Woodbridge (2056 / 3619) had a smouldering centuries old hearth to our left, friendly barmaid front and centre, and not one other customer to the right or in sight.  In fact, now I think about it, I'm not sure we saw anyone at all in Woodbridge who didn't work behind a bar.  A real ghost town, no wonder Dad liked it, it is always the people who frustrate him.  I'd feel the same if it didn't make blog writing that bit harder.  The Wherry was drinking excellently, I'm a big Woodforde's Wherry fan when it is in this kind of form.  Pairs well with a homemade sausage roll or three, which Dad was smuggling about his person.  Having had to suffer so much dining madness to date, snacking opportunities had been impossible.  He now strategically positions us so that we were not in full view of the bar but can still feel the fire.  Our situation is helped further when two ladies (presumably barmaids from other pubs) position themselves between ourselves and barmaid, so we can pop a succession of #MummyBRAPA homemade treats into our gobs in one go.  That's how to do surreptitious pub eating, ladies and gentlemen.  Whilst this pub was a vast improvement on the Cherry Tree, it didn't fully save the day.  What was it about the Angel which made the pub not as good as it should be?  Dad got it in one.  High stools, high tables!  Not in-keeping with an ancient pub like this one iota.  Flog 'em all on eBay and replace with something lower and comfier, and this pub could really be a winner.


After Dad did a bit more cooing in the direction of Woodbridge, we notice a building with something interesting and weird jutting out of the top.  A better blogger than me would spend the next five paragraphs telling you what it is, but I know you BRAPA fans  Only here for the pub!  Let's go in. 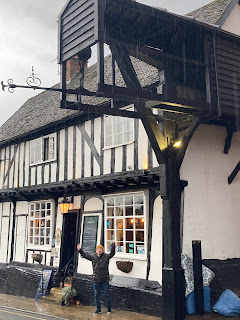 Olde Bell & Steelyard, Woodbridge (2057 / 3620) was a continuation of the theme recently developed by the Angel.  This pub fine-tuned it, to create the best pub experience of the day, and this pub would do well against any opposition.  This fire to the left of the bar is roaring from the off, the beams are crooked and warped, the furniture is low and comfortable, the floor is tiled and basic, and the Nightingale session ale is singing a sweet but unthreatening night time song.  An accidental 1 minute 27 second video I recorded, exclusively unearthed during the making of this blog, has the roaring fire up close, and mine and Dad's dulcet tones, as we make our way to a nearby table.  After discussing a pub we visited in Torquay before I knew about the GBG, Dad says "if only we'd come to these last two pubs first, we could've spent an hour in each, and rushed through the others!" which causes me to laugh hysterically, moan that my arms are still wet, which Dad ignores, and asks if this is our last Woodbridge pub or not, to which I say yes which pleases him greatly!  I tell you, accidental videos.  They're the future!  Later on, Dad says we haven't checked the football yet.  I look, wow, Hull City 1-0 up at QPR.  Dad accuses me of doctoring the FlashScores App data, he so doesn't believe me!  We'd already had piped classics from Billy Joel, Paul Simon and Dire Straits playing, when on comes 'The Lion Sleeps Tonight'.  "A win away, a win away, a win away" it seems to be going.  "IT IS A SIGN!"  I scream to Dad.  Yes, a sign I've had too much to drink.  Time to go. 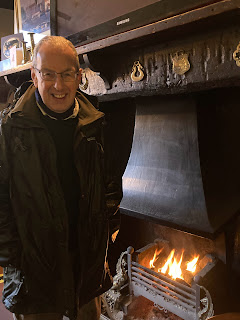 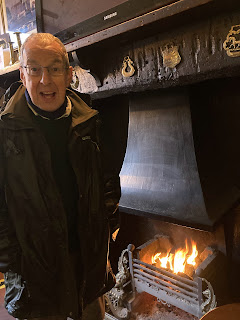 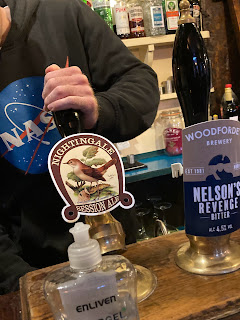 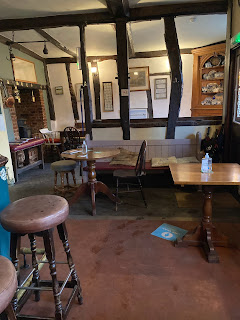 At Woodbridge station, Dad's town love-in is complete as a little glass window allows us views out onto this river thing behind and all this cute little boats.  "Even better than Accrington this!" he concludes (steady on now Dad, you've gone too far now).
One point I should probably note, Alex the Apple (our THIRD choice mascot, on the transfer list), hadn't surfaced from my bag in either of the last two pubs.  And we'd had a massive upturn in pub fortunes.  Coincidence?  I'll let you decide.  #BlameTheApple
Back in Ipswich, we now had plenty of time to get our sixth and final tick done thanks to our earlier taxi manoeuvre.
We walk past Portman Road, where there are about seven minutes remaining in their game against Burton Albion.  The occasional 'ooooh' can be heard, and it leads me to wonder if this is the first time on a BRAPA day I've walked past a football match in progress.
After a few issues passing Dad the camera for the outdoor shot, we get there in the end ...... 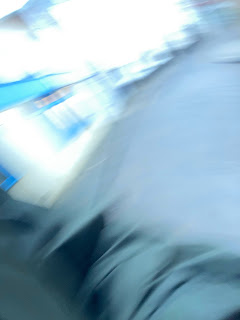 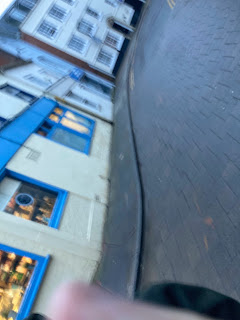 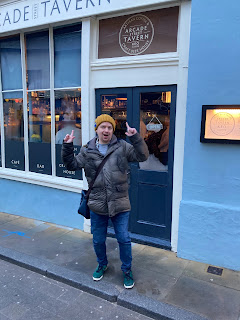 'And now for something completely different' as they say, here at the Arcade Street Tavern, Ipswich (2058 / 3621) and this bustling cafe bar (NOT micro, according to the GBG) has the kind of vibrancy that today has lacked, and it is nice to see.  It's got some depth too luckily, and Dad goes off to find us a seat through the back.  Getting served takes me a good sweet-ass time (if that's a phrase) and when I'm finally in, two pints of Earl Soham to finish the job.  I chose this because we passed through actual (unrelated) Soham on the train, mysteriously the station only known as 'SOJ' though when I say 'mysteriously', we can probably guess the reason!  Nice drop anyway, but it isn't long before some nasally voices appear behind me - Burton Albion fans.  Think Ipswich might've 'seen them sneaking out', for I'm not sure it is full time yet.  3-0 defeat, but they seem pretty chipper in the circs, their little red triangular shaped eye balls scanning the bar in vain for Bass, probably.  Dad's done well to get sat down, facing a big plasma of Soccer Saturday, but how come our game isn't finishing?  Injury time goes on and on and on, and though I'm sad to see it is now 1-1, Dad convinces me if we hold on, a good result, which we do.  Our keeper got taken off in a neck brace, that is why.   Some Tractor Boys soon join us, Alex Apple comes out for a final hurrah, and all in all, a satisfying end to a better second half of the day. 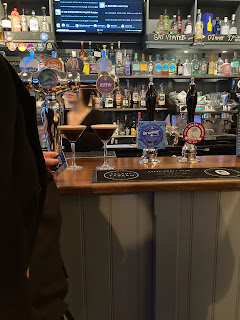 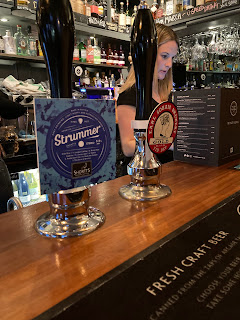 And now let the pain recommence as we try to get home!  A cheap but reassuringly strong Greggs coffee helped ..... 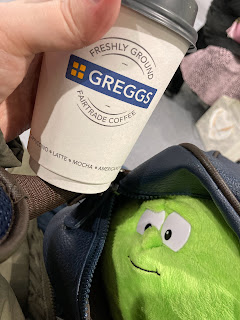 Train delayed out of Ipswich station, and then the speed restrictions on the way to Peterborough mean no chance we can get our connection.  Boo!
Luckily, there are two later back up options.   First of which is a change and Donny and then a change at L**ds, which could get us back for 10:36pm which would be remarkable.  It doesn't look on however, as our train is delayed by six minutes and the Donny-L**ds connection only allows for five minutes!
Our good friend and BRAPA hero Tom Irvin is on the train behind, texting us latest updates.  He doesn't tell us anything we don't already know, but we are glad of his support.
We deserve a moment of transport luck and we get it!  The train coming into Donny is late too, meaning we DO have enough time to make this connection after all.  Hurrah!  Safely on, waiting to depart for Lds, who should knock on the window but Tom himself.  He even takes a photo ..... 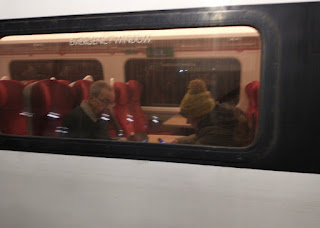 The Lds leg goes well, back in York 22:36.  Well we'd never have imagined that when we were supping Greggs coffee in Ipswich.
I slept til 12noon the following day!  I've had easier BRAPA days, but six ticks, and a positive second half of the day made up for a pretty trying start.
Well done all, even Alex, breaking news is that Colin and KLO are almost match fit again.  My Thirsty Thursday is a Wobbly Wednesday this week because work made me, so I'll see you over on t'Twitter for some midweek pub shenanigans.  Thanks very much for reading.
Si