Never before had I planned a BRAPA trip with such meticulous attention to detail as my recent Essex holiday down to Colchester.

Pub opening times were double checked, triple checked, as landlord's and landlady's up and down the country fiddle around on a weekly basis, deciding 'what works best for them in these difficult times', hidden on Facebook timelines beneath 5 million posts about their award winning Sunday roasts and dogs that have gone missing in Ware.

Train and bus routes were plotted, as were potential country walks between venues.  Vague maps were drawn, cauliflower and mini cheddars were packed.  I even had to take into account the progress of my fellow pub ticker Eddie, joining me for two days of ticking comradeship.

Down in London on the morning of Saturday 26th June, I made it Liverpool Street.  My first six Essex pubs bristling in anticipation for their BRAPA once over. 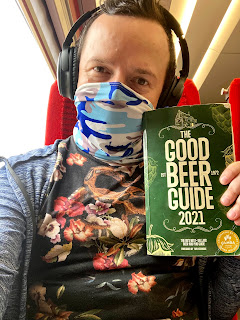 But when some poor soul decided to throw themselves onto the tracks at Gidea Park that same morning, all trains heading east were cancelled for a good few hours.  My plans quickly needed adapting.   I couldn't simply linger on the concourse for hours eating Upper Crusts and supping paper coffee.  No, I had to adapt.  London ticking here we come! 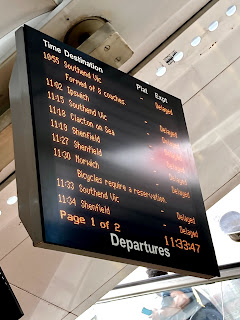 Not quite as easy as you might think, as I stepped out into the sunshine for the first time that day, blinking up like an Austrian who'd clambered out of a cellar.  The majority of London City pubs don't open on a Saturday or Sunday, as the majority of their trade are business commuters.  I found a grand total of one open BRAPA tick which was easily walkable.  This is it. 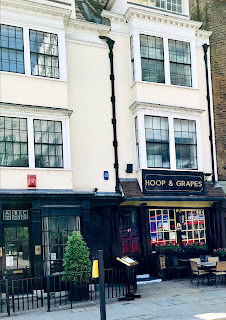 A Nicholson's house opposite Aldgate station, Hoop & Grapes (1810 / 3239) initially told me "give us 5-10 mins mate" as I reached the entrance at 12:02pm.  After a quick walk around the block, I return to find two large groups of perky twentysomethings already tucking into their linguine and Bellini.  I'm ushered towards a teeny tiny QR code on the table and encouraged (forced) to download and use the Nicholson's App, just when my phone thought it was all Pub Apped out.  Bit of a problem as the App tells me all the cask ale is unavailable, even though I can see handpumps on the bar, so I commit the cardinal London sin of 'going to the bar'.  The main bloke is surprisingly engaging and helpful for this part of the world, and tells me they do indeed have Proper Job or Landlord.  He even goes so far as to tell me the Proper Job is bottom of barrel, but the TTL is fresh on.  Legend.  So I get the latter.  Glorious.  And it should be at £5.40 a pint, a new BRAPA cask record which has stood since 4th Oct 2018 at Notting Hill Gate's Windsor Castle.  'I wonder how long this record will last?'  I remember thinking at the time.......

There is no sign of the train situation easing, so I get myself from Aldgate to London Bridge where I have a duo to tick off, and both open Saturday 12 noon too, so makes perfect sense.

I see the first as soon as I glance up, having left the station. 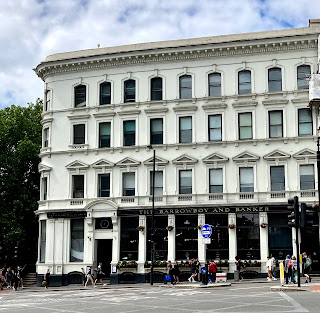 Trying to banish thoughts of "this is seriously eating into my quest to tick as many Essex pubs as possible", I wander in to this satisfyingly curved building, quite architecturally pleasing to the eye, and a barman leaps off his Covid plinth like some great orator of ancient Greece to greet me.  Barrowboy & Banker (1811 / 3240) is brimming with brightly clothed, shiny, transient Londoners, but the staff here are again of that 'going an extra mile' ilk, all done with smiles and briskness.  I'm plonked on an annoying high stool, dead centre, sort of prime location.  I'm presented with a clipboard menu, so I know prices are going to be high, and keg probably prevails over cask, and I chuckle as I note the Dark Star Hophead is £5.55 a pint.  The record didn't last long (okay, so I could've gone Pride for £5.35 but I thought if I'm going to be fleeced like the northern muggins I am, I may go down in style).  "We'll need the table back by 4:45pm" I'm warned.  I want to think of a quick, witty, sarcastic, cutting response but I can't, so ask them to keep an eye on my rucksack while I go for a wee. 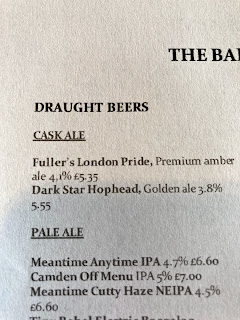 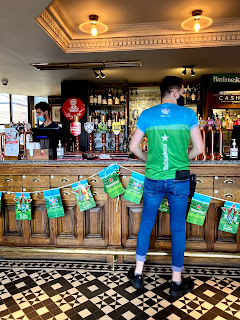 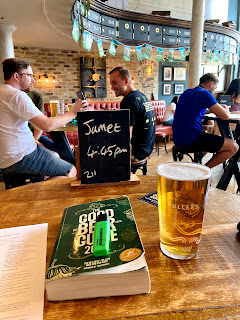 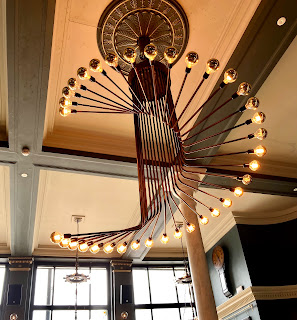 My other pub is close by, and before I realise what I've done, I've unwittingly walked into the bowels of Borough Market and is hard to imagine a busier place on earth in this moment as I strain to get any type of angle to take the obligatory outdoor shot. 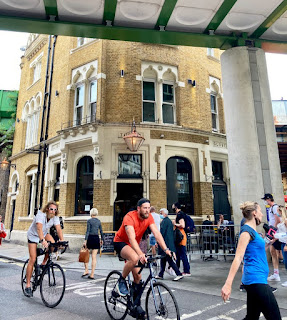 I walk into the Globe, Borough Market (1812 / 3241) and in some kind of London feat of our times, the staff are ultra friendly once more with great big beaming smiles when I say I'm just here for a drink and I'm just one person!  They wedge me by the entrance door, but when I ask about cask, I'm told none is on and they start murmuring excuses (Warm Weather, Covid, the Great Fire of London, Euro 2020) Ok, so I can't really hear above the jolly din of my assembled drinkers.  Uh oh, I know what is coming next.  Especially when the nice Euro guy hands me over to the friendly Geordie, as hearing you are paying £6.60 for a Beavertown Neck Oil in a Geordie accent somehow sounds cheaper.  Even so, he delivers the news in a voice thinner than David McCreery's hairline as I swipe the ole' contactless.  Despite all this, you'll be surprised to hear I LOVED my time here.  It was so vibrant and amusing.  Green bottles abound, and signing that song to Colin (who had been asleep up til now) was a sure fire way to make the arriving mass of people looking for a 'table of four and some food' think again.  I swear the Euro guy at one point looked over at me like "you are doing a great job there matey".  True, the pub was emptying.  By the time my 30 mins was up and I swigged off the last of the cold fizz, I was looking upon the remaining customers as distant relations and almost sad to go. 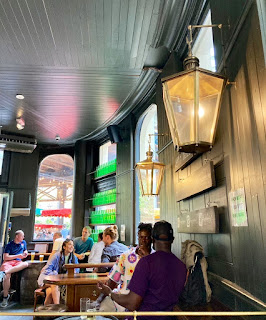 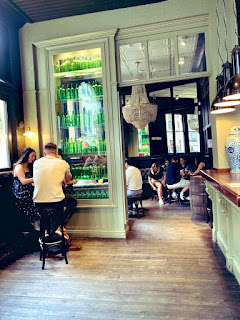 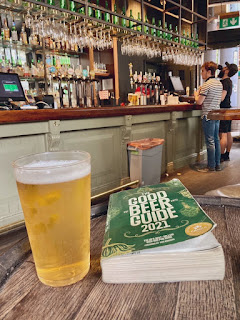 Back at Liverpool Street, and after a short delay I was finally able to board a train to Colchester feeling a bit shell shocked from my unplanned start to the holiday. 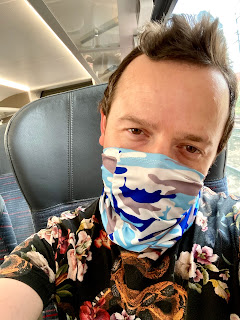 I'd paid £17.55 for three pints.  On the Saturday just gone in Halifax's Upper George, I bought three pints and a lemonade for £9.10.  Insane isn't it?
I checked in to my Colchester lodgings for the next 5 nights, had some lunch, packed a more  'BRAPA friendly' bag, and headed out to Chelmsford, where I had two ticks to finally chalk off the town in full.
I'll tell you about that, Witham 'Spoons and my first three pubs with Eddie F tomorrow night.
See you then, Si