Swinging a left around Blossom Street to Station Approach, the sun on my rucksack, an icy wind on my face, there was that same palpable electricity in the air that I'd felt on 4th July 2020.

Pubs were back!  Albeit outdoors, but as decreed by the BRAPA 5th amendment, 'it counts as a tick as long as you take a leak' (in their facilities).  (And tick is pronounced 'teak' to make it rhyme, think Speedy Gonzales).

A woman smiled at me and said 'good morning'.  In York.  In the street.  This was a red letter day.

Boarding a train for the first time since 15th December felt peculiar.  And yet I felt kind of 'alive' again after four very long months of simply 'existing'.  An old man's phone rings.  He can't locate it in the bottom of his bag.  He has one of those 2003 Nokia ringtones.  I grit my teeth.  I've missed this.   I take a swig of my aptly named 'Arctic' coffee.  The drinking mechanism is faulty.  It now looks like I've weed myself.  Plenty of time for that later.

Then the obligatory announcement.  We are the third train in a queue to leave the station.  Slight delay.  Hopefully won't be long.  Ah, nice to see things haven't changed.  I have to change.  At Doncaster.  Even that can't dampen my spirits.   A mad dash to make the Sheffield connection ensues.  Made it!

A student behind me asks her friend if her Dad is still stuck in Burma.  Conversation quickly jumps to British colonialism, and then becomes a critique of inbreeding in Spanish royal circles. A bloke across from me smirks, so I theatrically and deliberately pull my headphones from my rucksack and put them in my ears.  We exchange nods.  I've missed this kind of thing.

In Sheffield, the famous wall of water outside the station is switched off because as we all know, Sheffield water is the single biggest spreader of Covid in the western world.  That is a BRAPA fact. 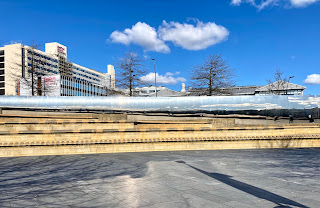 At the pick up/drop off area, my lift arrives.  Martin Taylor,  ladies and gentlemen!  Sporting long lockdown locks and an excitable expression, conversation seems disjointed until I realise he's speaking to wife Christine on loudspeaker.  She's seen off a root canal procedure, and wants to join us.  Bonus. Which allows us a steep climb towards north Sheffield where she is sheltering like a blonde alpaca, and I drink in Martin's pre-emptive local pub knowledge en route.  Waterbeach must seem a long time ago.

East of Sheffield, South of Rotherham, we find our first pub, it is just gone 12 noon.

Roland Arms, Aston (1736 / 3165) will be remembered longer than many due to the unique circumstances.  The fact it had so many shortcomings that it didn't feel anything like a GBG pub was neither here nor there.  "I'm camera shy" says the landlady as above photo is taken (or did she mean CAMRA shy?  In any case, you may be able to spot her in the window reflection).  We plonk ourselves at a bench in a modest marquee, the majority of locals and dogs look like they'd be here on a Monday at 12 noon regardless of any pub reopening hype.  Our young hostess is stumped by the 'what real ales are on?' question, admits out of side of her mouth from behind her mask that she's never heard of real ale so she'll have to go and check.  The answer is negative, so John Smith's Smooth, Carling or Fosters.  I go Smooth, as does Christine.  Martin asks for a diet coke, but after much umming and ahhing, it is discovered 'the pressure ain't working' so he asks do they do J20.  Luckily, yes, but they end up picking the flavour!  Us three can't stop chuckling at this sequence of events.  And Christine makes an intelligent point about how lockdown has perhaps allowed folk more perspective, and not to take things for granted so much, hence why we are all so joyful despite the pubs opening day limitations.  The biggest rule of sixers ever, young ladz, order much Carling, and many shots.  One of the funny blokes with big dogs has a rude sea shanty as his ringtone.  Salty Dick?  Check him out.  More laughter.    A toilet trip gives an indication of 'what we could have won'.  A pleasing pubby interior.  Deep wood panelling, pool table, swirly carpets, stained glass partitions, fluffy owls.  A bloke weeing along side me asks me how fooking great it is to be back.  Very fooking great. I'd forgotten about chatting to dangerous strangers whilst urinating.  Life affirming. 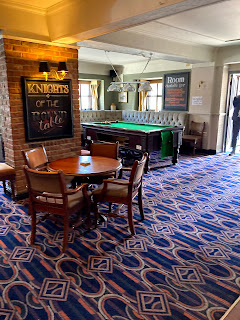 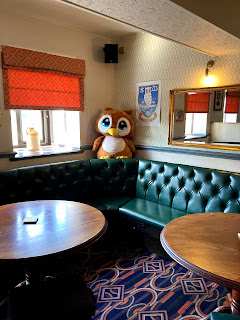 Onto pub two then, heading out further east not too far from north Notts to be honest, this next pub was part of my 'Mansfield Holiday Plan' that got cruelly cancelled last March.

Martin had been before, and challenged me to find anything interesting to write about this one.  Hmm, he wasn't wrong.  Greene King dining pub if you were wondering.  No chain during lockdown pushes quite as hard for a pre-booking, eating or not.  Indoors or out.  It really is irritating to the point you get paranoid.  I'd originally booked for 1 person at 13:45.  Then changed it to 2 people 13:15.  Now, here we were , 3 people 12:57!

No wonder our brusque hostess was sweating from behind her mask.  I stepped forward for the obligatory photo, and she told me to get back behind the (imaginary) line.  I hadn't crossed it, or had I?  VAR?  Surely? 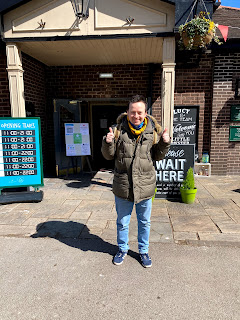 Little Mester, North Anston (1737 / 3166) was the name, and we were growled at to each do the Track n Trace, masks on, indoors, to get to this side door where they'd put the dregs (i.e. us and a couple of other pasty faced diners) in this grim side bit with a grey wall, the strong wind blowing the laminated menus away so Christine had to pounce on them, as a couple of local ladies shouted across some jokey south yorkshire bantz which we had no idea what they said.  The beer choice finally allowed us cask.  Yey!  Greene King IPA or Black Sheep?  Oh hang on, the Black Sheep isn't on!  GK IPA it was.  For the first time in my life, I enjoyed this beer.  After the JS Smooth, it tasted a bit like Oakham Citra.  How odd.  And then, nothing happened.  Glad I'd brought my thickest winter coat, scarf, gloves and hat though.  An indoor loo trip reminded me what every GK dining pub looks like indoors, making me feel less bad about this 'outdoor ticking' business. 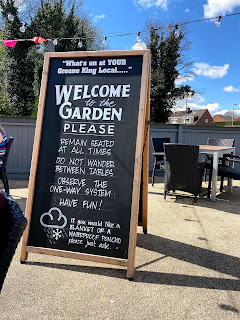 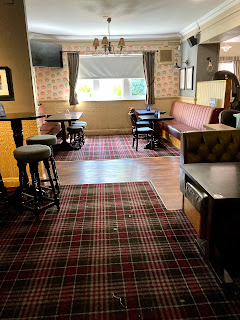 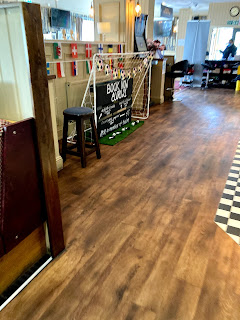 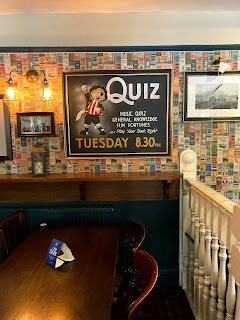 So that was all very delightful, as Martin and Christine dropped me back outside Sheffield station and  I made my way back to York.  I'll do a part two at some point to tell you how I've found York so far.

Now I would like to tell you how Monday was a 'sign of things to come' for BRAPA over this next month, but I maintain things won't really kick off until 17th May (if that date holds of course).

In South Yorkshire, I have 14 pubs left to do.  Only 5 of those are definitely open/opening at some point during April (just 3 currently, one a micro so presumably very limited space).  8 are almost certainly waiting til May.  With 1 unknown that is probably not worth the risk.  So whilst there's the chance I may travel for the odd sporadic tick, it'll be few and far between.  Roll on indoor opening! 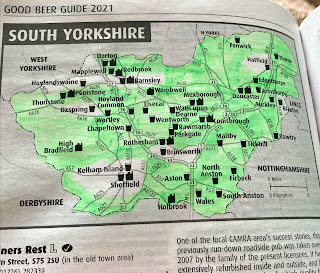 Thanks very much for reading,