With a sense of eager anticipation but also a fair amount of trepidation, I left BRAPA Towers on the morning of Saturday 4th July 2020, 09:50 to take the first careful steps back towards the world of pub, the world I know best and feel most comfortable with!
Yet I can't remember being this nervous pre-pub since I landed in Melbourne, and went straight out alone into the Saturday night chaos looking for craft ale at $17 a pop at 11pm in a strange new hemisphere.
The early signs were positive.  John the Magic Moth was on my door to wave me off ...... 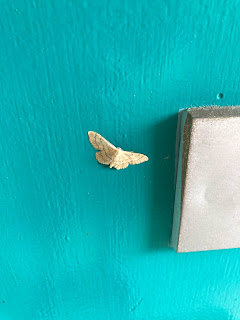 My neighbours cat, Angry Jason, looked at me in that 'go forth and multiply' kinda way ...... I tell him I'm a cat person on a daily basis, and not too fond of dogs, but Jase detests me regardless. 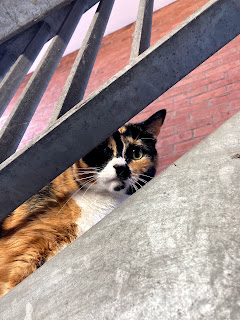 Having had near on four months to select my pubs, I settled for a trio featured in my earlier #SWANKYPUBS (Springtime Walks at Night 'Kross York Photographed Unprofessionally by Si) which I passed constantly on my favourite lockdown walking route from late March-mid May.
None of them are fashionable, particularly real aley, all reopened today, none made you book in advance, and all had mapped out clear instructions on their Facebook pages re what was expected of the customers to make today a success.
I walked up one of the unlikely snickets in my immediate vicinity which I've shamefully only discovered since lockdown ..... 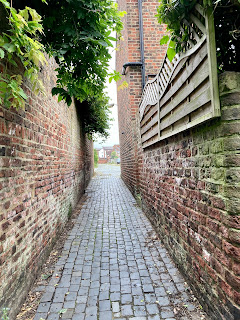 And after what felt like an interminable wait at two sets of traffic lights to cross the road, the pub was in sight.  'If there's a swarming gaggle of people outside or inside the entrance, walk around and go back home' I kept telling myself in my head, but apart from one young lad who glanced up at the pub sign, nodded and walked in, all was quiet, 10:01am, 1 minute late! 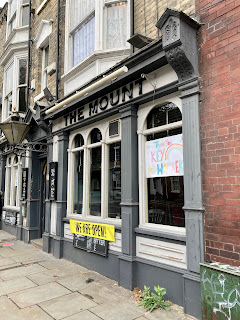 The Mount surprised me with its 'happy for you to go to the bar' policy, so it was nice to see arrows and stickers on the floor leaving people in no doubt how they should socially distance.  There were three people in front of me, a jowly local Warnock-esque character, a lively stringy L**ds Utd fan who kept getting teased on whether they'd mess up promotion, and a friendly young lad who said hello and told me I needed to 'check in' and use the hand sanitizer on the wall, which was more liquidy than I was expecting and went everywhere!  Checking in required scanning a Q code thing on your phone, this directed you to a local Marstons webpage, where you selected the pub from a drop down list and typed in your name (I just gave 'Simon') and mobile number.  I was  not surprised to see a total lack of real ale, as this was the case on my previous visit last summer, so I went for a 61 Deep which was, I have to say beautiful, what with the pint glass and smell of pub you cannot capture at home!  The young lad told me he'd only come here this morning because he'd seen so much insane hyperbole in the media re going back to the pub, he was curious to see if it'd really be so chaotic  I nodded sagely. He went to join his mate, two pints of Guinness and a tanned old local bloke brought us up to six people, he had to be barked at from afar for simply wandering off in the wrong direction and not observing the new directives!  I joined in the congratulations to new landlady Nicole, what a time to have your first day in charge.  She put my beer on the other bar through the hatch, where I went to retrieve it and sat in the window, trying to look reassuringly at passers by like 'see, it ain't so bad'.  I closed my eyes as I took my first sip, and opened them to find the Guinness pair and Tanned Old Rule Breaker (TORB) smiling at me, one saying 'ooh you look like you'd been waiting for that!'  A huge bee started buzzing around the window, scaring me, but when I came back from a pee, the bee had gone and TORB shouts over 'I got it into your empty pint glass and took it outside!'  It's this kind of random interaction that I've been missing!  I went back for a second pint, same again, and realised these new rules make small talk with the staff much easier, and Nicole says she'd been expecting far worse and as long as people stick to the rules, she was confident it'd be a good day.  It still wasn't even 11am like, but I didn't say that.  Someone asked for a beermat but they weren't allowed, unhygienic apparently.  Woah!  My friends in Barton said they were having the same issue at the White Swan.  Did not know that.  And when I left, I was told I had to exit via the back gate through the garden which I didn't even know existed. 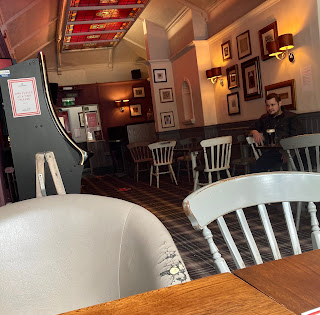 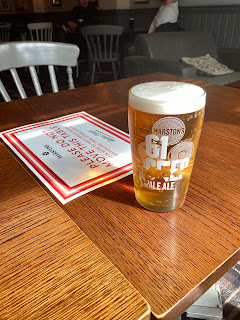 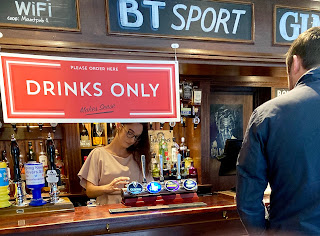 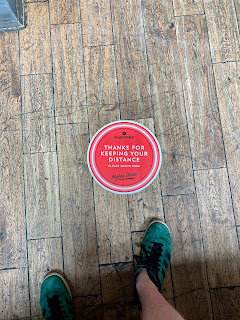 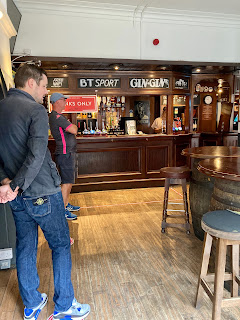 After a quick detour back to BRAPA towers, it was time to take the 15 minute walk west towards the racecourse where the Knavesmire pub sits nicely on the corner.
Opening at 12 noon, this Greene King house I suspect does a fair bit of food and had a table service only policy, so I was half expecting a bit of a queue but again, all seemed quiet as I approached. 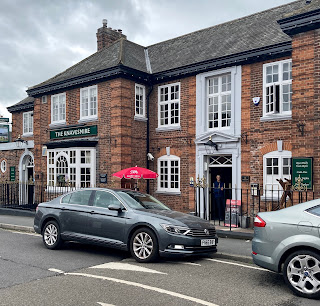 A bloke immediately swooped down on me and asked if I was here for food or just a drink.  'Drink' of course, and he effortlessly reeled off the three ales on offer with tasting notes to boot!   Wow, could get used to this.  Shame I said "Oh, Ainsty Flummoxed Farmer?  That's a nice one!" after he told me about GK IPA and Ruddles.  "THEY ARE ALL NICE!" he implored.  Ooops, such a beer snob.   I'd been ushered inadvertently into the darker pool room to the left, with two football matches about to start, so was joined by four young lads.  The bloke asks if I mind giving my contact details like I genuinely had a choice, and I notice beermats too, so obviously this problem doesn't affect all pubs.  A bit less signage here I thought, though the staff were constantly up and busily directing folk about.  I think I prefered the Mount approach, and experience in general, but nice to get a pint of ale.  The lads were talking Premier League football like it was the only thing in the world that mattered, and after one went on a rant about his love for Tyrone Mings, one of his mates said "you've never actually supported a team have you?"  He admitted it was true, and then gave this response  ..... "I'll start supporting Leeds when they get promoted, they are our local team after all!"  I wasn't going to let anything upset my ultra positive non-critical mood today, but it was at this moment I decided I wouldn't be staying on for a second pint!  Before long, I needed the loo of course but when I asked our server of naturally yellow hair tones, she tells me I'll have to then leave the pub by the exit, and come back in the entrance door to get back to my pint.  Phew, these one way systems are the one difficult part of this new regime I wasn't anticipating!  And in the brief 5 seconds I stepped back out into the street, I nearly collide with a guy in a Hull City top who says hi to me.  Life is weird like that isn't it? 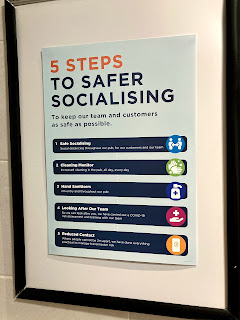 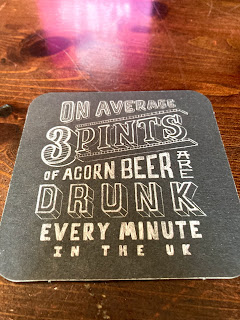 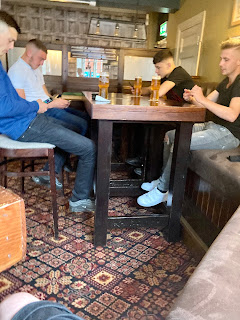 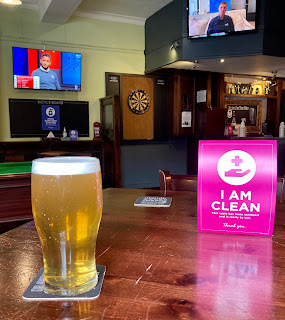 The 'I Am Clean' sign was swiped away from my table about two minutes after I sat down, charming!
I'd been thinking about giving the next pub a swerve, but with my confidence now up, I thought I'd give it a go, again despite talks of food and bookings and popularity on their Facebook page in the last 24 hours. 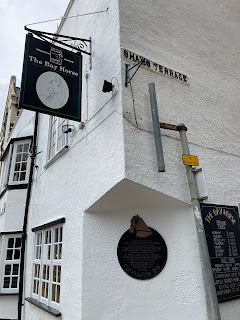 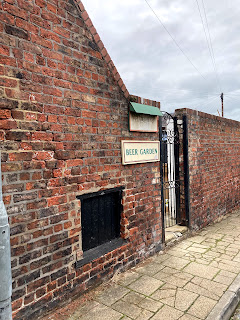 The Bay Horse is York's third oldest pub, and as such, the shape of it doesn't make it particularly conducive to social distancing as you can imagine.  Bit of a let down on the ale front, usually, though at least here they apologised for lack of it, but as a pub it is an atmospheric tight-knit place.  All through lockdown, they've been having their biggest refurb and deep clean since the eighties, and it felt almost unrecognisable in places.  The 'secret' backroom I sat in alone seemed a totally new discovery, but my friends insist I've been in here 'literally at least twice'.  When I walked in and sat down with an expectant grin on my face, I sort of got gawped at but when I told them I was just here for beer, they told me to come to the bar and were super friendly after that.  Really chatty, lots of north eastern accents, and the guv'nor comes through to chat to me about all the work that's gone on , and how they are coping with the changes, none of which I can remember cos my Guinness was distracting me by tasting of liquid soil but you could really feel the positive community energy in this pub.  No beermats, and back out into the hub of the pub looking for the loos, a few old blokes blocking doorways which they probably shouldn't have been,  so this time by choice, I exited via the beer garden and side gate, where the majority of the punters were. 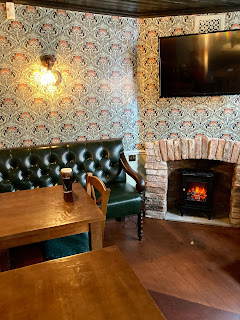 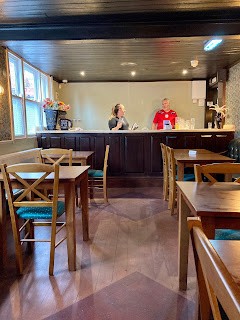 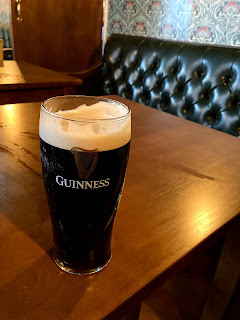 As I wandered back to my flat, the school bells bonged for 2pm, just back home in time for a late lunch and some documentary about Wimbledon (the tennis thing).
I'd not been expecting an experience anything like this positive on the whole.  It restored my faith that everything will be ok eventually, and a lesson not to get too carried away in the social media circus that seems hellbent on claiming that pubs are permanently chock a block hellholes inhabited only by the most irresponsible low-class scroaty scum of society.  We of course, know better!
True, it'd be interesting to see what they'll be like by 10pm (I'm not going to do that by the way!)  But it it gives me the confidence that a return to a full on BRAPA new pub ticking trip might not be too far away.
Happy pubbing all,
Si
Posted by Si 'BRAPA' Everitt at 8:59 pm