BRAPA is ..... Pissed As a Newt(on) : Derbyshire Evenings

For a second consecutive Friday, I was on the 16:04 sweaty pacer from L**ds to Alfreton, having to contend with unpredictable behaviour of a ginger student, bound for Nottingham, who just couldn't keep still.  She irritated throughout.

But I was in single minded mood in my ongoing quest to complete Derbyshire before the new GBG 'drops', ready to hit the county with all the ferocity of John Leslie hitting .... errrrm, well you get the idea.....

A ten minute delay at Sheffield set the scene for a much unluckier evening than the one I encountered in Ripley & Swanwick the previous week, putting me under severe pressure to make the bus connection.

And when a blind man with a funky white stick was first off at Alfreton, the rest of us could only shuffle 'patiently' behind him, over the single file railway bridge.  Agony.  I'd never make the bus now, time for plan B, a 29 minute walk to South Normanton.

I'd barely crossed the Alf-Norm boundary when traffic, booming music and motorbikes appeared.  This was the Rock and Bike Festival, and a poster kindly told me Toyah & the Macc Lads were the two main headliners.  Woah, this was a SERIOUS festival, fair play.  I could hear a fantastic punk version of 'Irish Rover' as I powered towards South Norm, and I'll be buggered, it was one of my old Rebellion fest fave bands, 'Neck'.

Other acts included 'Tom Jovi', that is a bloke from Benidorm doing covers of Bon Jovi and Tom Jones.  WHERE DO I GET A TICKET?  Stupid boring BRAPA. 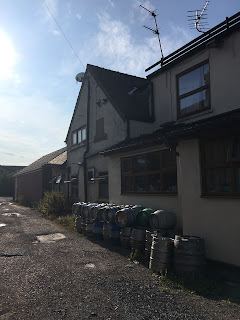 I formed totally the wrong impression of the Devonshire Arms (1682 / 2685) as I walked in through the 'dining' area, and was a bit sad to see tables kitted out with knives and forks (all obviously empty).  A friendly young bar lad smiled at me with his tongue out, he looked like he didn't have a thought in his head, I liked him.  I ordered a Screech Owl, £3.10 for a 5.5% ale, not bad is it?  I'd paid with a tenner but asked him if he wanted the 10p (so he could give me a straight £7 in change).  Well, this blew his mind and after 2 mins staring accusingly at the till, he told me, with an air of embarrassment to 'hang on', went to get his Mum/Grandma, who had to explain he owed me £7 with a roll of the eyes and a big sigh!  He blushed.  I told him I was sorry for confusing 'things' (i.e. him).  I pushed through a door where a busier bar was full of tanned blokes in hi-vis downing pints of lager and I went into the adjoining room, where a 'half-friend' of the hi-vis gang seemed engrossed in an ITV3 drama repeat, resplendent in his Isle of Man jacket and bovva boy cap.  My table had a Ladbrokes betting slip and one of those little pens, 'twas that kinda pub!  When IOM guy left to smoke, a quirky bespectacled bloke with loud voice said he wanted to put the tennis on 'instead of this crap'.  He left the room and returned with the landlady, who was brandishing a pool cue (not 'queue' as I erroneously said on Twitter, but thanks to Mudgie for being on Russ duty to correct my error).  He says "don't you have a remote control?".  "No, it's broken because someone pissed on it!" she replied, and expertly prodded the buttons with the tip of the cue.   We got chatting (well, him shouting across the room in a strong Derbys accent at me), he wanted Nadal to beat Federer.  I said I didn't care, but whenever I watch Nadal, he loses, so it ain't a good sign.  Sure enough, Federer won the set.  In all the insanity of this pub, I nearly didn't notice my Screech Owl was pretty dire.  And yet, in the grand scheme of things, I didn't really care!

More character in that one pub than Gainsborough and Retford had mustered in a combined five!  It inspired me to keep going.  Yes, buses to Newton (arguably the hardest of my outer Alfreton ticks) were sparse in evenings, so a 44 minute walk north it was!

Wasn't a terrible walk, footpaths for the most part.  An owl hooted from a nearby tree as we got within sight of the village.  My Vietnamese work colleague told me earlier a hooting owl is an unlucky sign in their culture, I wish I'd heeded the warning!

Still, as I approached, all looked well.  Another solid, sturdy, no frills Derbys pub of old.  Right??


The black door you see above didn't really look like an entrance, so I continued around the perimeter to the front of the pub, where the scene changed dramatically. 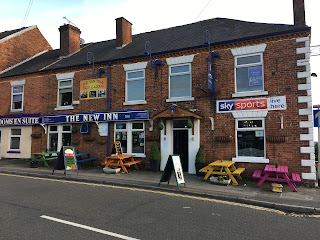 The multi-coloured picnic benches at the New Inn (1683 / 2686), strange cabaret signs and heavy glass door were the first signs all might not be what I'd been expecting.  And inside, the scene turned into a horrific nightmare.  Not quite sure when this 'refurb' has been done, I'd suspect quite recently, but it was like they'd enlisted a design team who'd most probably have never been inside a pub in their lives.  I wondered if Gemma Collins and Rylan had been involved.  Hell, it made the Dog & Partridge in Yateley look like the Holly Bush in Makeney, and I barely exaggerate.  Utterly vile, and a surly barmaid got annoyed when I asked a question which I annoyed myself with "Is this the only ale you've got on?"  It was, it was Dukeries, and it was fantastic quality.  But then she asked if I wanted a top up and smiled, and I felt even worse for as I'd now been identified as a real ale twat.  Yet, the pub was so wrong, only a bloke with the most ridiculous toupee who kept eyeballing me was a source of amusement.  I couldn't stay inside this gaudy pimp bordello of suffocation any longer, so went out to the 'garden', a twee astroturfed effort of zero character.  The lame 'positive quotes' like "be the best you can", "keep believing" and much worse that I've blanked from my memory were on the outer walls too.  I ate a packet of my own crisps in protest.   No wonder the George & Dragon down the road was much busier and full of happier folk.  I returned my glass to the bar due to the quality of the ale, and an older barmaid said 'thanks darling' but the damage was done.  If this pub had been a footballer, I'd have booed it off the pitch.


And my misery wasn't finished just yet as Google Maps 'claimed' to have come up with a scenic route back, which turned me onto this footpath called the 'Blackwell Trail' and claimed I could cross the adjacent Normanton Brook.

But try as I might to find a bridge / crossing, I just couldn't, and I spent so long searching, that by the time I bit the bullet and decided just to return to via South Normanton, I was in serious danger of missing the last train home 21:44 via Sheffield.  So I had to power walk like I've not power walked all year .... and finally started to get back within the realms of 'train catching', even getting greedy and wondering if the 21:33 final direct service was still on.  It wasn't really.

The festival was in full swing as I powered down the home stretch, and then the lucky break I deserved, the 21:33 was delayed to 21:38.  I reached the station at 21:36, legs shot, totally out of breath!

What an effort.  And I spent the journey back contemplating the pubby conundrum.  Poor beer but amazing pub at South Normanton versus great beer but abysmal pub at Newton?

Now, I know they call it the Good BEER Guide so my head tells me Newton deserves its place in the GBG (one ale on or not) and I'd like to think I was just unlucky beerwise at South Normanton but if that's the usual standard, it should be dropped from the Guide.

Yet every other fibre of my being would MUCH prefer to be visiting pubs like the Devonshire at South Normanton than the New Inn at Newton.  A conundrum that is enough to keep me awake at night!