BRAPA - Go Frith and Multiply : Battle to the Chapel


Just one pub needed to finish 'greening up' North Derbyshire, but it wasn't going to come quietly.  No, it was going to throw the pub equivalent of a twantrum (twild tantrum), kicking, screaming, throwing toys out of the pram at every step of the way!

I left work in L**ds at 4:26pm.  I got back into my flat at 10:46pm.  For the sake of 25 minutes max in ONE micropub.  No train cancellations, or delays that ultimately affected meant missing a connection, it just really took that long!

The train to Manchester Piccadilly was the first leg, where I had to change for a Buxton slow stopper.  I had to stand until Huddersfield where I got a seat next to three young ladies excitedly discussing Love Island.  "She'll never make the right choice" they said of one contestant, before adding "last night, she couldn't even decide between an apple and a banana so ate both!"

My smirking superiority for being 'too intellectual to watch that shite' (I'm not really) was soon cut short at Manchester Victoria when I was lucky enough to be paying attention to hear the next stop was Newton-le-Willows and it wasn't bound for Piccadilly.  I'd been on the wrong train this whole time!

Fortunately, I managed to fight my way off through the incoming crowd, apologising profusely as I did so, and found a connection to Piccadilly.  This was delayed, and I then had to dash from platform 14 to 3 to make my Chapel-en-le-Frith connection with 3 minutes to spare.

I needn't have worried, as we then were delayed 5 minutes setting off.   But in turn, this put pressure on my pub visit as I worked out it was an 18 minute walk there and back from the station, meaning 30 mins max in the pub if I was to make the York connection back in Manc Piccadilly later.  Phewwww (hope you are keeping up with all this).

Time to breathe and recite this beery rallying cry that all 'Chapel' residents chant every morning ......

At Chapel, with the rain and wind swirling around, I skidded up station approach and powered towards the town centre, eager to shave off as much of the 18 minutes walking time as possible.

I was helped by some steps up to a cobbled approach that dumb Google Maps hadn't been aware of, and was taking the outdoor picture at 19:11, the time I'd been 'due' to get there if train had been on time. 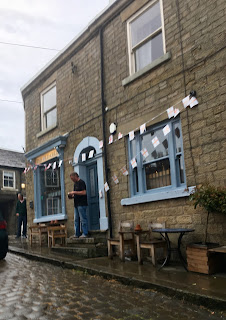 But then to my horror, a lady with an air of self-importance blocks me at the door.  "Private party I'm afraid tonight, sorry!" she states in a very clipped way.  "But....but....but" I stammer, open mouth collecting rain water, "I've travelled all the way from L**ds JUST to visit this one pub!"  After a couple of very long seconds silence, she smiles and says "oh well, if you've travelled all the way from LEEDS .... follow me!" (well, I said L**ds, not Leeds, but we won't quibble).  She marches me through the crowd of revellers, who are all looking at me like "what's his game?  I don't know him, do you?" and 'presents' me to the owner, a lovely older lady called Stella (top beery name!) and explains the situation.  Stella seems like she wouldn't have been fussed either way, and we soon get chatting BRAPA over the din of noise.  "Are you a CAMRA then?" she asks, and I admit like a bloke ordering a nudie mag off the top shelf that I am indeed 'a CAMRA', and I get a discount on my Banks Mild, a surprisingly reassuring ale to see available in a Micropub setting, known more for mysterious brews with names like Chinook 5.013B, Alien Shoegazer and Woke Rhubarb DIPA made in Cornish sheds by women with beards and Claire Balding forearm tattoos.    Seems my Banks Mild choice has helped my popularity grow, and a few party guests use it as a route into conversation with me.  Soon, a jolly bloke from New Mills is slagging off North Welsh people for being a different breed, and a blonde lady comes along to reminisce on the hot weather last June, bemoaning the plan tonight was to have food outside and people spilling onto the cobbles..  I'm totally squashed into the coat-stand during all this, next to the toilet door where a banner reveals it is a 40th birthday do (for a 7 foot bloke in a checked shirt).  He looks much older than me, so that's something.  The mild is great quality, and for all the chaos, I can appreciate this has a much pubbier air than nearby micro, the Beer Shed in New Mills.  As I prepare to leave, a DJ in the far corner is chanting "1...2, 1....2" about 50 times in a row.  No one knows what he's doing, but probably a good time to leave this crazy situation before the party really gets started.  I'm glad to have it ticked off!


The rain was heavier than ever as I stood with five chavs bound for Manc, train luckily turned up on time and I had plenty of time to get my connection back to York.

I got a Costa Coffee to perk me up (don't know why, always find them disgusting) and a European sounding bloke apologised to me for asking the staff to heat up his toastie.  "It's just that I've been on a train for SEVEN hours" he complains to me.  "Wow, where have you come from?" I ask.  "Lowestoft".  "Oh wow, that is Norfolk or Suffolk isn't it?"  "No idea HAHAHAHA" he replies.

Well, if he was an illegal immigrant, kudos to him for coming in via Lowestoft, an unconventional BRAPA approved route.  He can stay.

A pain-staking but mercifully quieter journey home follows, but yes, through my door at 22:46.  Ugh.  When I told Dad this story the following morning, he said "I must ask you what on earth was the pleasure in all that?"  Well, I had to think about it, but it was probably the moment I got the highlighter pen out on the train back and got to 'green it off'!


Besides, there'd be much more of the same on the Saturday.  I'll tell you about that in two traumatic parts starting tomorrow in the earlier lunchtime/afternoon slot as I'm not at work, so look out for that one.