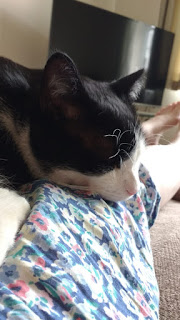 There's a time during every calendar year where, and I almost daren't admit it, I get a little bit sick of bloody BRAPA and the whole concept of 'ticking off every pub in the Good Beer Guide'.  Whoever would come up with such a stupid idea in the first place?!?!

You can usually rely on the beer to be of above average quality, "which is nice",  but that is not to say the establishments included in the book are ones you would necessarily CHOOSE to frequent (especially if you are into old boozers like me).  Like it or not, you are at the mercy of bearded men and ladies up and down the country, in their cheap woollen sweaters, overhanging tattooed bellies, pairs of crocks with white socks, thin lips and mean crooked mouths.  And don't say "that's a dated stereotype" cos it is true.  And CAMRA knows it.  And it makes them feel guilty.  A little part of them wants to be young and trendy.  But they aren't (overtly) allowed.   So they overcompensate by including their local Micropubs, Cafes, Kitchens, Brewhouses, Antics and, for the more discerning posho, Ember Inns and Brunning & Prices.  And if I end up paying £6 for a schooner of something not strictly cask, they don't really mind.  I usually just laugh manically and sneer from the corner and try and write amusing reviews after the event.  But very occasionally, I think "what the bloody 'ell am I doing with my life?"

Maybe it is because I'm about to turn 40, are these the baby steps into my mid-life crisis?  I'm not going to live til 80 though, let's face it.  Eyesight, bladder, kidneys and liver already shot to pieces, perhaps I'll be half robot by the age of 60?   I might get a cat.  But not a wife.  That'd be cruel.  On the cat.

And April all started so wide-eyed and fresh-faced and full of hope with BRAPA's 5th year anniversary celebrations too.  Bedfordshire didn't depress me.  It tried.  It always does, but it failed.  Hell, even a North London day which included more Wetherspoons than any other day in BRAPA history was actually a really 'fun day out'.


But by mid month, despite some sporadic highlights, I felt like I was going through the motions.  It wasn't the pubs themselves that actually bothered me, but the expectations (on myself mainly) to do a set number of pubs in a set place on a set day, then write about them.  I don't want it to become a chore, that's exactly why I started this BRAPA malarkey in the first place, to get away from routine!

I must say I'm delighted the football season is over.  Hull City AFC is a depressing basket case of the highest order and how a club so thin and flimsy managed mid-table amazes me.  Nigel Adkins worked wonders.  Unanimous calls for his head in November, at Swansea on Saturday they were begging him to stay.  If I was him, I'd walk.  He'll have nothing to work with next season!


And that is BRAPA relevant because I'm equally delighted the structure of the football season is broken, and May-June-July gives me the freedom I crave (and should have all year round) to do what I most want to do, GET BACK TO COMPLETING DERBYSHIRE, STARTING CUMBRIA, THINKING ABOUT DURHAM AND ESSEX.  There we go!  I'm feeling happier already.

And it should be noted that last weekend's trip to Swansea broke my mini-cycle of misery somewhat.  Mumbles was amazing, one of the best.  The pubs a bit more questionable on day two back in Swansea itself, but an equally enjoyable day.

In total, I completed 42 new ticks for the month, which I'm very happy with.  Highlights included Victoria Inn in Mumbles, Railway Inn in Upper Killay, Duke of York in Higher Broughton and Half Moon in Hitchen.  More than honourable mentions for Orange Tree and Railway in Chelmsford, Gidea Park Micropub, Crown in Flitwick and many more.  That Bass I drank in the Pilot in Mumbles was something special.  And it is a big BRAPA thumbs down for the Bear in Bedford, Anchor in Great Barford and Queen's Head in Chelmsford.

I think May is going to see a return to form once all the Birthday nonsense is out of the way.  I even have the lovely Martin Taylor joining me on 4th as he is finishing Derbys with his one remaining tick in the same area of the county for which I am heading.

More of the same on 11th.  Not sure exactly where in Derbys I'm going for that one yet, depends what I've got left beginning with a B, C or D!

I'd also like to get back to Fri evening after work ticking once things settle down (April was full of Bank Holidays, mini weekend breaks etc so hard to get that opportunity).

18th will be nice cos it is a rare chance to get my York friends on a BRAPA trip.  We are keeping it 'East Midlands', but more Notts than Derbys.  I can't reveal where yet as a bloke has made me sign a special code of secrecy called the MMC (Mystical Mansfield Charter), can you believe?!

And on the 25th, well, Sunday 26th to be precise, Dad is driving me around a few tricky Derbyshire ones.  It could be amusing as the day before, I'll have been at the Slamdunk Punk Alldayer in L**ds, and Dad will have completed a week of Wolds Way walking in Filey, where incidentally the Liberty Stadium away fan toilets were made.

And on that fascinating fact after the worst blog I've ever written, let's hope for a brilliant month of May!