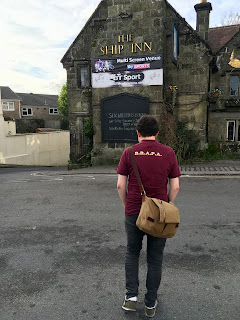 27 pubs into my record breaking 30 pub holiday and time for the final push, as me and Martin (Taylor, not Owl) found ourselves in the kind of obscure pub ticking country (North East Dorset) which would be perfect if you'd committed a murder, but still wanted to keep your quota up without being caught by the fuzz.

It was that time of day we refer to in the trade as 'squeaky dry midweek bum time', 3-4pm, so many pubs supposedly closed for the afternoon, but the brewery taps of Cranborne and Sixpenny Handley hadn't opened yet.

It was left to Shaftesbury to save the day.  Our most northerly point, Martin seemed to be an expert having been here several times before for various ticks, but never this one.  He even knew where to park, and gave me a village tour, the feature of which was Gold Hill (not to be confused with the Child Okeford vehicle of the same name) where that Hovis advert was filmed where that idiot twild with the shitty bike and silly accent is always late for work cos he has to get up a hill with heavy bread, or something.  I'd forgive a big lump of cheese, but bread has never been this exciting.


The pub was on a different hill because it didn't want to feel left out, a pretty interesting location like it was perched on edge like some grazing sheep which you can't really tell from this angle: 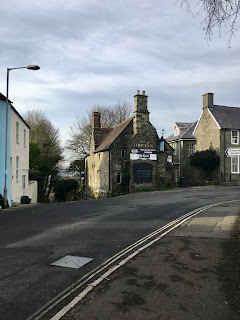 Well maybe, I tried anyway!  Martin will've got better pictures than me, he always does.

Well, just when you thought Dorset had no more white rabbits to pull out of the ale stained magic hat, it comes up with this corker which let's be honest, was as good as any pub (minus perhaps the Vine at Pamphill) that I'd visited all week.  The tiling, the nautical decor, the locals who refused to smile, the landlady who looked like she'd been there since 1700, but in a nice way, the docile yet gently growling dog in no way twoggy, and just the gentle stillness of a midweek afternoon session where old boys with hard to decipher accents chewed the cud, snarled and drank dark brown bitter.  Me and Martin sat in the corner whispering excitedly like two naughty boys at the back of the class.  Not that I could say it felt like the epitome of rural Dorset, ship theme or not, it felt so hopelessly Cornish with that squashed ancientness, think of the Star at St Just or Crowlas, the Five Pilchards at Porthallow, it had that kind of atmosphere.  Martin must have wondered how the GBG had brought him Shaftesbury way so often, yet he'd never had the privilege of this gem before.  On the way out, we discovered small side rooms just as beautiful as the rest of the pub, my only regret, I couldn't understand the locals to pick up on what they were chatting about, probably idiot pub tourists or summat! 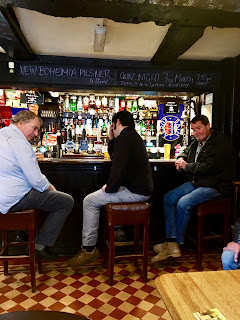 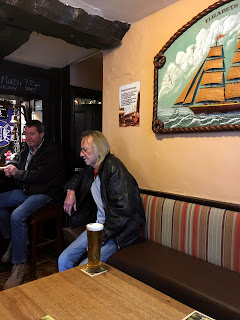 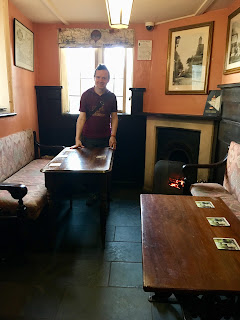 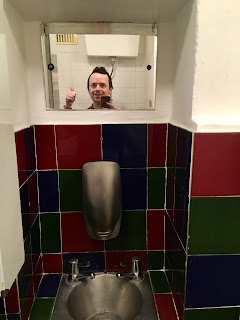 Now time for one of the 'key moments' of the day as we meandered into even deeper Dorset-shire territory, to the wonderfully named village of Sixpenny Handley.  A major fire here many years ago led to donations from neighbouring villages, and so many clothes were donated, it was said that you could always spot a Sixpenny man after that, because he wore two waistcoats instead of one!

Due to open at 4:30pm on this sunny Wednesday afternoon, it was its first time opening since 6pm on Saturday, so we were understandably a bit twitchy about our hopes of getting this 'hard to reach' pub tick.

Martin parked up, I went for a pee and thought I'd located the 'pub': 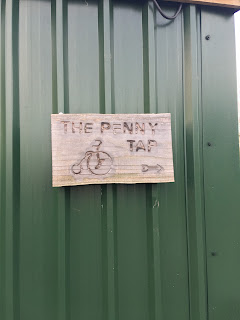 But that's an arrow, and this was just a green corrugated shed, so I went around the corner and found a Sports Pavilion with a GBG sticker on the window, it looked like it could potentially open soon, hard to say! 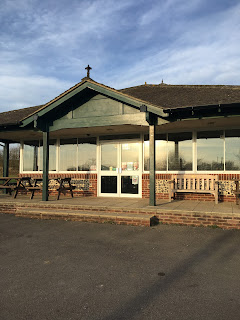 It was only 4:15pm still, so Martin went for one of his legendary walks and locked me in the car so I could nibble my snacks and read a book he'd given me called 'The Rough Pub Guide'.   I was just reading about a pub called the Victoria in Coalville when he returned, and told me it was 4:29pm, let's try and get in!  I quickly gobbled up my final sweet chilli veggie roll and third cheesestring, and was ready.

Sixpenny Handley originally housed the Sixpenny Brewery Tap, but it did rather well (proved by good ales I'd had by them on a few occasions already this holiday) and moved to bigger premises at Cranborne, where we were due to visit next.  This left the Sixpenny residents without a watering hole, so they opened this thing with a slightly tweaked name, selling their own ales called 'Brew Shack', even more restricted hours, but you know TWAMRA, they love any place doing their own brews, so they bunged it in the Guide.

Pleased to see a door ajar, we wandered in and in true Dorset tradition, a local had somehow appeared from nowhere to get in first!  "Ooh let's have a look what's on!" I says, half to myself and half to Martin.  But the harassed looking barmaid busily copying ale names from a notebook onto a blackboard in careful lettering which hardly anyone will ever read, snapped "you'll have nothing yet cos we aren't quite open!"  Checked my watch, definitely 4:30pm now.  After 5 more minutes of not much happening, Martin decided to 'get something from the car' so I just paced the perimeter of the room, which was cosier and better heated than you may expect from a Sports Pavilion, a decent place to sit and have a drink (well, if you could get one).  By now, the barmaid was rushing around running taps and pulling beer through into a series of jugs.    Closing time was 7pm.  Was this going to be the first place where 'last orders' sounded before I'd even got served?!  You'd think if your hours were so restricted, staff would get here a bit earlier to get set up, rather than this disorganised rabble we witnessed today?  Eventually, it was beer time.  Local first of course, "Thanks for your patience!" she says to him, a bit pointedly for my liking, or was I being paranoid?  He reminded me of King Rollo with a facial piercing, and he smirked in a sickly way like the kid who's farted, blamed everyone else, then bought the teacher a Granny Smith.  Finally came my ale, decanted from a jug.  "I've not poured that well!" she says, decanting it back from glass to jug, then pouring it a bit more carefully.  It did the trick for a few seconds but soon became a thinnish black mess again, not that I care, it tasted ok.  Martin, I think, had a glass of lightly chlorinated water.   We noted how there was a village meeting due a week on Thursday re the re-opening of the village pub, a proud sturdy stone building we saw on the way out of the village, and I hope it happens cos the villagers deserve something a bit more permanent than this place.  To the barmaid's immense credit, she apologises on the way out for the disorganisation on the way in, but I had been chuntering to Martin a bit!  But nevertheless, a bit of a shit show, and if Cranborne was 'Football Twitter', it'd be chanting things like 'Tinpot' and 'What's it like to see a Tap?'

So there we go, that was my 50th pub in Dorset and my 39th tick of Feb breaking my BRAPA February, so two reasons to be cheerful as we made our way towards Cranborne, Google Maps Sat Nav lady well and truly packed up by now.

Even worse, after parking up in the village, I noticed our next Tap was in Holwell, Holwell Farm to be precise, and in this insane moment of genius, Martin span his car around a few times, and suddenly, we were there.  I seriously don't know, it was like his body was temporarily inhabited by the spirit of a local rag n bone man from the 18th century.

This was more like it,  a proper historic building, converted Victorian stables no less, you could almost feel the ghost horses nuzzling up to you, or perhaps it was just sixth pint of the day feeling! It was bustling with jovial locals of all ages and one of those welcomes, where we were siphoned in the direction of the bar in that encouraging "come on lads, get yersleves in!" kind of way.  Great atmosphere.   Where to sit was the next worry, as we skirted around a buffet table.  "Help yourselves lads!" said a man with a bright red face, more fresh air than burns victim I should add, 'take that (and party)' Firkin Shed in Bournemouth, this is how to treat visitors when you've laid food on in a public space.  We tucked into cheese, bread sticks, cherry tomatoes and the like, and you could see why this is a local CAMRA award winner.  It had a bar billiards table too, just in case any cool kids appeared, Sir Quinno for example.  And then a young couple came in and played a green barbecue lid (or was it one of those Smash mash potato aliens?)  in a manner which was far too serious for what the situation demanded, and looked faintly ridiculous, although I'm sure they were very talented.  Was that Eternal Flame by the Bangles or We Didn't Start the Fire by Billy Joel?  I just couldn't quite place it.

Well, nice to end on a high and I said farewell to Martin as he dropped me back in Wimborne from where I took a bus back to Poole for a relatively early night, before the long journey back to York next day.

What a holiday it had been.  Competing with Isle of Man for best ever I think, even eclipsing my October trip to West Dorset and that's saying something.  My GBG looked so much greener than when I'd started ...... 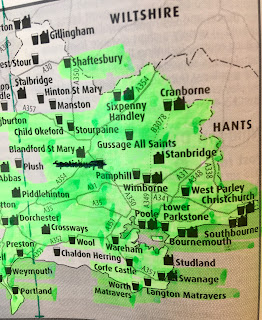 I'll be back in October, basing myself in Salisbury (so I can make a start on Wiltshire too) and try and polish off the north of the county, places like Bourton, Gillingham (with a hard G), Thornford, Laymore and the like.  Of course, the 2020 GBG will be with me by then so I could have a lot more than the 14 ticks I currently have remaining in Dorset, but that's just the way the Dorset Biscuit crumbles isn't it?  One things for sure, it is my favourite county in the south to go to for pubs so far, make no mistake!

For now, I had two days recovery before a Lancs day with Dad, which I'll tell you about in a couple of days.