'Twas getting dark on Saturday 22nd December as I fought my way from Ponders End (Southbury) three stops down to White Hart Lane, like a stubborn piece of KFC Mighty Bucket stuck in an old man's intestine.

Annoying really, when Hull City in their golden pomp of 2008 first came here, real ale was ridiculously scare (according to the then GBG) and I had to resort to drinking Guinness, or cloudy Badger Tanglefoot in an unidentified Gospel Oak dive.  Once I even took 4 cans of Mackesons Stout on the Tube.  And now, in these Wembley days, BRAPA pubs suddenly exist!

I ran inside, as my bladder was by now leakier than Man City's defence, a seamless link as they were being spanked at home by Palarse, and the locals were LOVING it, glued to the screen, doing weird dances like Rigadon from the Adventures of Willy Fog whilst singing Ossie's Dream out of their nostrils.  Probably.  The beers were all Redemption, I couldn't quite bring myself to go for the Hopspur cos too many Arsenal fans read my blog in comparison to their lager drinking pub hating rivals (probably x2) so got something else,  Eric DIPA or Delle Aley I think (you're welcome!), and made a couple of 'ho ho ho' comments as I joined in the Crystal Palace love in.   From nowhere, an ancient bloke shaking with rage appears at the bar from the back of the pub, complaining people shouldn't be playing pool whilst he's enjoying his evening meal!  "We're trying to cater for different tastes" the landlord tries to explain to him apologetically, but the man is having none of it.  "I'M GONNA PUT THIS ALL OVER FACEBOOK!" he shouts and storms out.  I found it genuinely amusing, as if this bloke is on Facebook(!) but the poor landlord looks genuinely put out so a couple of locals placate him with words like "well you can't please everyone mate" and "don't listen to the silly old bugger".  It was a bizarre moment, just as my observational skills were waning.  And apart from a local trying to be funny by putting a low seat at the bar cos he couldn't find a barstool, nothing happened til the match finished and a dude came over with about 10 football accumulator betting slips and starts ticking them off like one of those losers with a Good Beer Guide.  After many exasperated groans, I ask how he's done.  "Won nothing today mate, but you gotta be philosophical ain't ya in this game, some you win, some you lose, mugs game innit, dunno why I bother, I'll probably be luckier next week!" 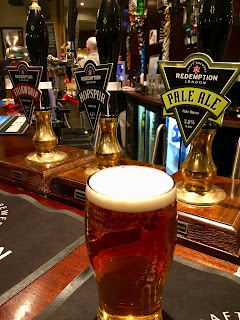 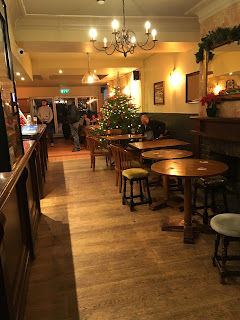 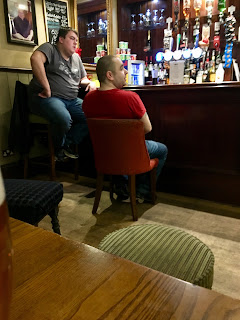 There was one more pub for tonight, a few more stops south on the same orange and white tube line (I call it the Blackpool line cos I can't remember the real name) to this quite trendy lively area called Stoke Newington (not to be confused with North Bucks fun-hole Stoke Goldington) where there's a pub I'd almost gone to a few times but had just evaded me.  Tonight was the night, but how do I get in?

I know I'd had a bit to drink but I'm sure you'd normally be expected to open an actual physical door to get into a pub, so when I seemed to find myself behind a damp velvet curtain (don't Russ!) and 'announce' myself into the pub like Mother Goose in Panto, I knew I was somewhere a little bit different.  It was peak London this place, not many people older than 39 I can tell you as I stride to the bar, order a quality pint of Titanic Plum Porter, try to pass over a fiver, only to be told proudly by the bar bloke that they're a card only pub nowadays.  "Ahhhhhh, realllllllly?" I said, with far too much intrigue in my voice, for let's face it, this day has been coming for a good few months now hasn't it?   "Yup, last 3 months, and it's been a real success" he declares with a smug satisfaction, so I decide to tell him I'm from the north so we don't have that kind of thing in pubs ..... yet!  He smiles with a mixture of contempt and wonder, and this northern monkey trudges off to a table in the centre of the room.  But I can't settle.  Where's the bogs?  I'm looking everywhere, end up asking this brilliantly friendly tattooed bar wench who tells it's down some hidden steps right in the corner.  Funny pub this, it's kind of beautiful despite the one roomed trendy hustle and bustle, and what I thought was cat wallpaper is 'people at the theatre' wallpaper.  Oh, and I wasn't alone, a drunk little fly stumbled towards the light of my candle, I tried to squash him but he wriggled back to life so I straightened him out and talked to him.  Take that popular 20 somethings of Stoke Newington, I'm one of the cool kids now! 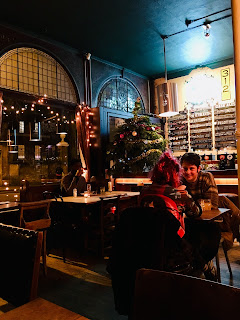 So that was a fantastic day then, six more London ticks, and as I travel home, I'm reminded Hull City are playing and have somehow won 3-2 despite being 0-1 down most of game, bonus!  Our form really is improving. 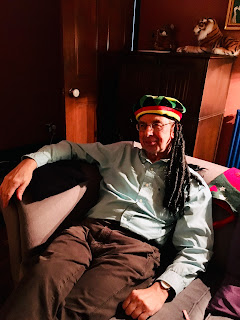 And before we knew it, we were driving over top of the murky Peninnes to Prestonia, for the Boxing Day match and hopefully FOUR pre-match ticks if things went well ......


Thankfully, the weather was a lot better by the time we met BRAPA guest legend, Preston's finest pub tour guide Matthew 'SeeTheLizards' Lawrenson not far from pub number one, and it had 'Spoooooooons written all over it.  Well, 'Savings Bank' but you get the idea.

Not a brilliant former bank like Yorkshire, or even Clydesdale, or even National Australia, I have to tell you, but something lame like TSB from what I remember Matthew saying, or was it Bank of Scotland?  Well, one of the two.  Anyway, at least it was a grand enough 'Spoons to get a sense of the former bank set up, twelve tellers positions were still visible, but all eyes were on the stereotypically farcical scene at the bar.  10:59am, and about 15 people jostled for position, as one poor barman tries to serve everyone all at once.  At least he had a photographic memory enough to remember who was next in line, but you could feel the impatient breath of the bulbous nosed Prestonians on the back of your neck as you prayed he'd make eye contact.  Soon, we were in, for a life-giving pint of 'Twelve Days' by Hook Norton, which confused Dad as a 'Twelve Days' in the 'Twelve Tellers' wasn't something I'd done knowingly.  Matthew led us to a semi-booth (not the local supermarket) at the far end, meaning we had to walk through twild life who'd much rather be playing with their new prezzies at home than watching Mummy and Daddy (the latter wearing shorts because he can) munch their way through full English breakfasts despite the fact they'd been up til 2am on the port and prosecco, I imagine.  I'd say Stilton, but dunno if Preston folk do cheese other than cheesestrings, laughing cow and dairylea triangles.  Yeh, and that's about it.  Nice beer, good feel, decent 'Spoons, much better than the Grey Friar or whatever it is called in town. 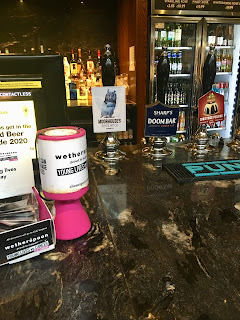 Preston amazes me pub-wise in that I've been visiting for the purpose of pub ticking since 2003 when my sister came to the Uni of Central Lancs and I discovered the brilliant Black Horse, a pub that shaped my whole love of pubs.  And Hull City have generally been in the same division as them, so to be still discovering pubs that aren't micros or brewery bars all these trips on surprises me.

This next one was a good/bad example of that as we walked down a side street, still very central, but it kind of felt like an area with its own community and life. 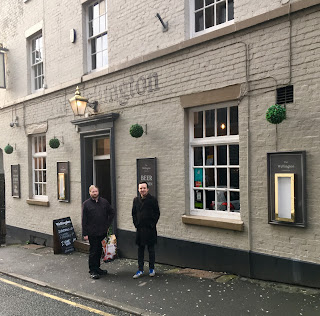 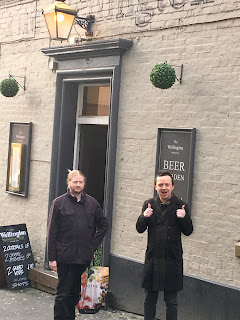 It looked like crummy blandness from the outside, and it was crummy blandness on the inside too, Marstons crummy blandness, the worst kind of crummy blandness.  It hadn't always been this crummy and bland, you could tell by the shape of the building, nice tiled floor, ace Preston window mirror thing with that weird lamb on it, and faint historic atmosphere that it had once been no doubt a cosy multi roomed community hive of life and laughter.  Not the chilly uncaring distant loveless hole we find in 2018/19.  It even had a pool room in the back room sat alone that seemed to be sobbing gently to itself, dangling like a carrot before pub visitors noses as if to say "we could be a good pub if we'd chosen to be, but it was easier to be crummy blandness".  After being served by a young dude who struggled to raise a smile, we sat in a back room and a procession of locals peered in at us as if to say "Who are you?  Why do I not recognise you?" as I supped my perfectly serviceable pint of Pedigree.  Weird Boxing Day TV like Penguins and Disney reflected in the mirrors, and the board game selection of old classics and weird modern shite seemed to sum up this pub's struggles quite well. 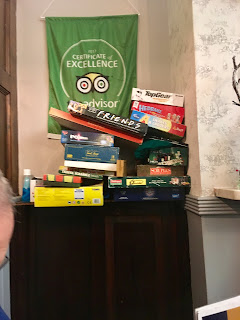 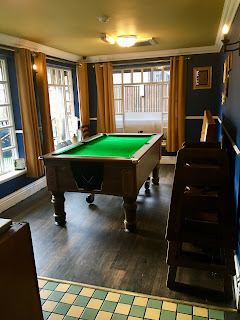 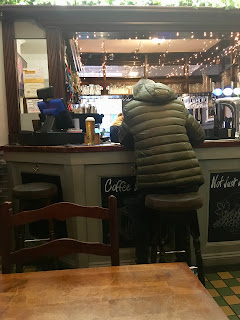 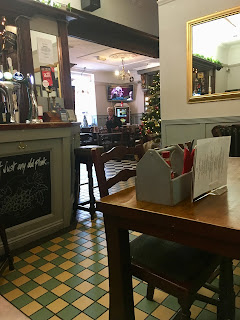 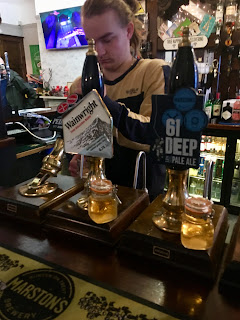 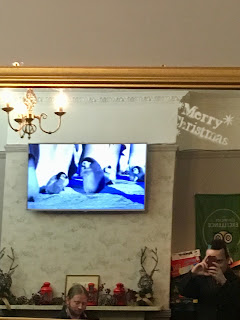 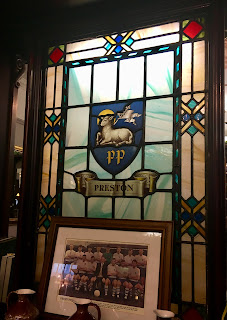 So it hadn't been the most amazing start to GBG ticking in Preston, but there were still two pubs to do before the match.  Things had to improve, things would improve!  Join me for tales of that in part two, plus a little bit of last Saturday's epic trip to Lincoln.