BRAPA - A Dent'on my Good Beer Guide (Part One of Two)

Friday 14th September then, and the time had finally come.  We were in GBG 2019 territory, it had been released the previous day and the lucky few already had their paper based copies.

I left for work too early on the Friday morning to see if Mr Postie had bunged one through my custom sized extended letterbox, and for now, had to soldier on with the updated Good Beer Guide App, and my disguised 2018 edition ...... 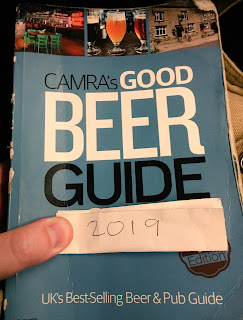 My fellow passengers on the L**ds to Manchester service, it has to be said, stared in a confused way as I prepared this photo.

But if this evening was the unofficial launch of my 2019 pub ticking, it couldn't have started much worse!  My train to Rose Hill Marple was due off platform 1, and slightly delayed.   I hopped on and all seemed well as I chuckled at two young ladies discussing Ikea and boring birthdays as we powered through Guide Bridge and other familiar places, til I saw Flowery Field.  We aren't due to stop here!  Nooooo, I was ON THE WRONG TRAIN.

Seems my train was the front carriages, and must have sped off 2 mins before the one I was on.  I had to think quick and recover before I ended up back in Glossop, so hopped off at Godley.

Now, a pub called Godley Hall had just been de-guided so I didn't consider this (there IS no Godley haha!), but a 1.7 mile walk took me to GBG regular, the Cheshire Cheese in the Gee Cross area of Hyde, and what's more, I could get back to Woodley/Romiley from there and get 'back on track'.  Phew!

Okay, so I got briefly lost again on a walkers footpath trying to be clever, but eventually I reached the pub and it was still light outside (I must also mention I was carrying a 'work laptop' in a huge rucksack so being mugged was the last thing I wanted tonight!) 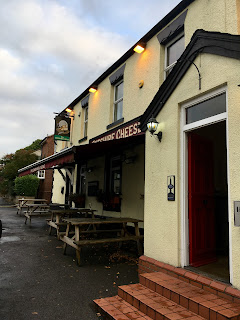 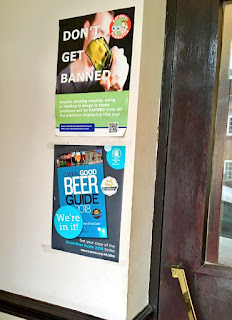 Note the 'old' GBG 2018 sticker on arrival, nice to feel me and the pub were in sync, despite it's definite inclusion in the 2019 edition.  I wandered in to find a glorious old school local, business people and tradies all drinking, laughing and chatting together.  I counted my loose change.  £3.50.  Surely that'd be enough for a pint of Silver King in a pub in this part of the world, so when she charges £3.55 and notices my hangdog expression, she asks what's wrong with me, so I tell her all (well, not ALL, we'd be there all night, just about the change situation).  "Oh go on, I'll put the 5p in miself" she says as I'm scrabbling around looking for a note.  As I thank her and make a lame 'getting rid of change' comment, the three barflies looks of contempt were a picture.  One looked at me like this was my 'routine' I do in every pub.  It's not a bad idea really, it certainly painted this pub in a good light.  I can't imagine a Brewdog or Beerhouse & Kitchen doing this.  As I sat in the corner by the door (where I belong!), some men with paint stained clothes played cards and laughed a bit too raucously, especially when someone made a joke about "he's been looking for you on Companies House!"  Suspicious.  The pub quietened down significantly as people sloped of home for their dinner, so I followed suit, shouting thanks at the barmaid who was crouched down behind the bar doing whatever barmaids do, and probably scaring her to death but I wanted her to know I was grateful! 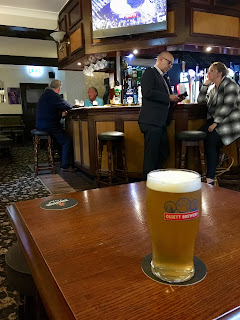 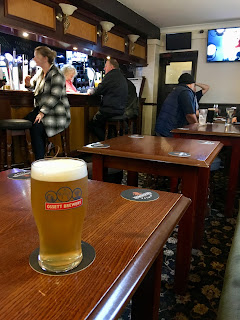 And in a nice moment of GBG serendipity, a pub in the 2019 GBG which hadn't been in the 2018 edition, also listed under Hyde, was just down the road so it hadn't worked out too badly at all.

After all, pub ticking legend Duncan Mackay flew down to London on GBG release date for some intense ticking, and in his first pub, he had to take the ale back cos it was off.  And in the next pub, they forgot to bring his food out so he had no choice to ask for a free pint to compensate him for the emotional trauma caused.  I wonder what misfortune befell Martin Taylor on his debut 2019 outing? 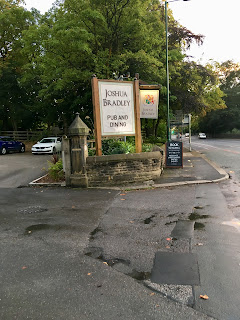 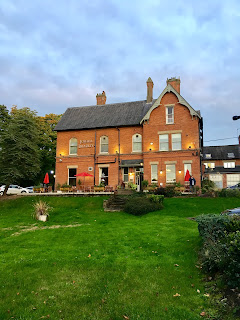 As I stepped up to take the second of these two photos, a car swung into the huge car park and nearly ran me down.  The woman grinned like "well that's what you get if you take photos of pubs" and I wondered if this was a bad omen.  Took a while to navigate my way around the grassy area and into the pub.  Now, if you 'hid' any reference to 'Hydes' I'd have sworn I was in a Brunning & Price pub.  The grand set back location kind of 'in its own grounds', the dining interior but with a definite commitment to ale and drinkers, sweeping staircases, high ceilings.  Yes, I'm aware many Hydes pubs have tried to go a bit down the craft & dining route, but nothing on this scale, and let's face it, generally not done this well!  Even the clientele were the same, lots of tans and white teeth, people who come out for a posh dining experience but two glasses of Prosecco in, forget themselves and switch back to rough as fuck harridans and ogres, which make them a lot more bearable.  After some pitifully slow service, I took my (very good) Hydes Original (£3.10, paid it in full!) to a distinct drinkers area to the front right where some bloke had just offered to buy a round for the first time in years, so they were all contemplating which spiced rum to order.  The music was awful, even for a Friday evening, though i enjoyed a bit of Billy Ocean a bit too much and a barman laughed at me.  Friendly place this, in the loos with my rucksack, a bloke said to his mate 'ey up, he's got a rucksack' and then concluded 'not worth your while blowing the two of us up!' which I knew was a terrorism joke, but I didn't really get his logic.  Presumably he thought I needed to wait til I got in a more crowded area.  An interesting end to an okay pub experience, though easily weakest pub of night. 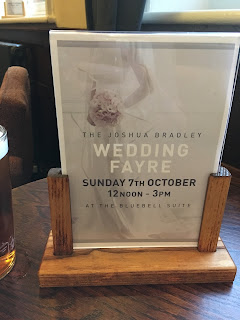 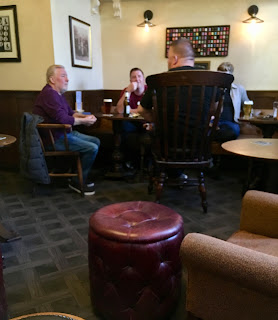 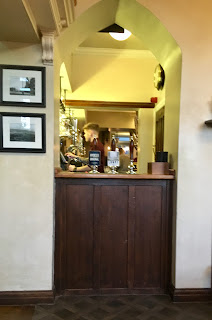 It  was becoming clear that my hopes of going to Rose Hill and doing two Marple pubs was now unwise, as the last train was about 9:30pm and not 11pm as I'd hoped.

I did contemplate a walk to Romiley and do the micropub there, but I decided to err on the side of caution and walk to nearby Woodley and get back more to an area with more regular services back to Manchester Piccadilly.

Well that makes sense doesn't it?  What could possibly go wrong?  Find out later this evening in part two where we'll also have a GBG update .....