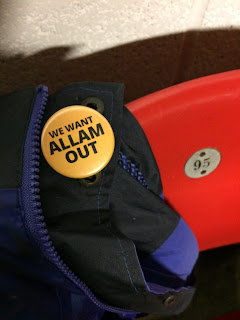 The weekend started like all good weekends tend to do, on a Friday evening.  As the train chugged happily out of L**ds towards the moody Interchange of Bradford, you'd never have known by my fellow commuters expressions that two days off work, bonfires and fireworks were nigh.

This was a rare recent incursion into deep Bradford territory, and the sights at bus stand K were so harrowing, I had to take a photo of stand J instead: 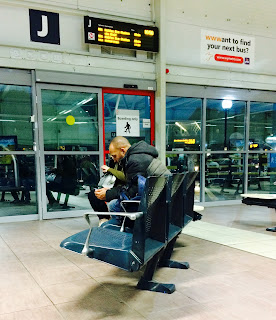 Rush hour traffic turned a 2 mile journey into a painful crawl, I wished I'd walked, but soon we were in the so called "urban village" of Wibsey, which felt more like a nice little sub-town than something so horrific.  This was no Holbeck.

The pub loomed out of the darkness with it's glass frontage, imprinted with the pub name in a way almost any drinking outlet built after 2014 has:

The scene that greeted me was the type that would probably cause a little flutter in the heart (or crotch) of micropub overlord Martyn Hillier, as this was pretty dyed-in-the-wool if you were looking to observe the 'template'.  Let's just say my micropub bingo card was being dabbed in overdrive.   A square white walled room, some comfy but modern seating totally unoccupied, and two steps up to a small bar area.  First I had to dodge a dog toy, then bulldog (Bruce) and I had to do a bit of impromptu skipping over both Bruce and his owners lead.  At the top, I had to step over a more fragile, cute pup (i.e. twog) called Wilma before muscling in next to 4 local characters at the bar who looked at me suspiciously as I smiled nervously.   I spied an ale called "Nomadic Pariah" (SBS B+, very well kept) which seemed fitting for me in this current climate, a point I made to the assembled crowd, but no-one got it.  Maybe they are like the folk of Chorlton, another potential urban village, and cannot do more than two syllables at one time.  The landlady (Alison?), was a bubbly blonde lady, and the friendliest man had a very unique speaking style.  Close up, he sounded scouse.  The further across the pub you moved, the more Yorkshire he got.  Turns out he used to live in Acomb, not far from me.  As I went to sit down in the seated area, I not only had to dodge both dogs again, and the toy, but Bruce (a particularly unhealthy wheezy thing) had left a trail of saliva on the first step just to make my journey all the more treacherous!  A sign said "real ales, real conversation", there were some board games (taboo, monopoly, trivial pursuit) gathering dust, and a smattering of beer books.  Alison upset the fake scouser (a massive Star Trek fan) by asking "is that the programme with Dr Nimoy in it?  Well, I know it's some sort of comic thing!")  She was politely told "just stop talking".  Most attention was, as you'd expect, centred around the two dogs which everyone was determined could become boyfriend and girlfriend leading to all sorts of comments like "don't be shy now, he only wants to sniff your bum".  Probable Alison seemed to be pushing live music too, the locals seemed skeptical in a place so small, and she was forced to admit it might get to the point where they've have to stop customers coming in(!), from what I could gather.  Bruce and Wilma were taken for a walk, I was told "welcome to the madhouse", but I already had my coat on cos bus was due!  If you like Micropubs, you'll love this.

Not too late getting back into York, nearly finished West Yorkshire ticking, and up bright and early on Saturday to join the O.G. Squad (as the kids say), that is Dad and Tom in Sheffield where we'd made the brave decision to see how Hull City would get on at Bramall Lane.

Luckily, I had 5 new pubs to do in Sheffield and aim was to get them all done today.

We started with the modest aim of two pre-match, to encourage 'visitors' (which didn't materialise) and trammed it to Shalesmoor, the Ship Inn to be precise, but things hit a snag when at 11:05am approx, our vaguely emo hosts knocked on the window to tell us they were opening til 12, regardless of what the GBG and Whatpub say.  Just when I was getting to grips with ghost stories and the fine exterior!

If I've found one county which most like to flaunt the 'advertised opening times', it must go to South Effing Yorkshire.  An otherwise great county for pubs n people I might add.

So what to do to fill in the next hour?  After some debate, we trammed it up to Hillsborough where I'd spied a pub on Whatpub called Hillsborough Tap which looked slightly more pre-emptive than the Rawson Spring 'Spoons at the tram stop ...... 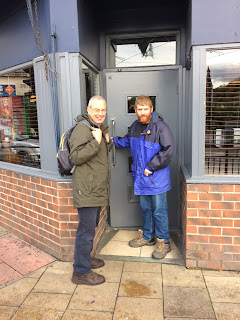 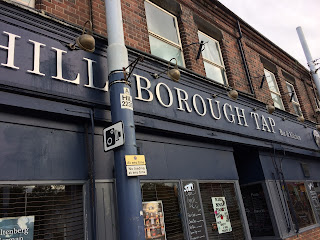 It  was the welcome from the barmaid which really made this pub a positive experience, it could have been rather average otherwise despite a motorbiked Sheffield Wednesday fan hanging from the ceiling (you could say all Sheff Wed fans are best when they are hanging from the ceiling, but I couldn't possibly comment).  Anyway, she was a great lass, loving my enthusiasm around seeing 'Belgian Blue', a cracking purple ale - am not a massive fan of fruity real ales unless they are done proper 'balls to the wall', like Plum Porter and this.  You can keep your saltaire raspberry cascade and shizz though.  Ugh sorry, when did this turn into a BEER BLOG?  Anyway, in a move reminiscent of Kensington, two unfriendly old men refused to confirm the directions of the loo, when I got there I found a nice 'please don't take drugs sign',  and the steps had a lego pattern on.  This was almost like a big micropub in a way but a bit too 'no nonsense boozer'.  Possibly not the best pint of Belgian Blue, but warm, friendly, I'll go to plenty worse GBG pubs between now and Christmas.  (Yes Tom, I said the C word, another £1 for the jar!)

It was gone 12 noon when we got back to Shalesmoor, so we crossed the road, saw an old man inside, but still couldn't get in ourselves!  That's because it was one of those proper old doors which need a good push and a bit of a kick. 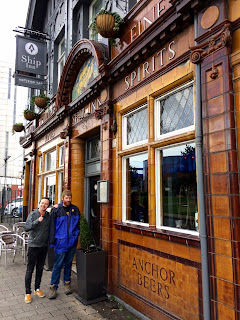 So in at last and the old man we could see was laughing at our difficulty getting in, especially as I'd suggested he was the pub ghost.  In fact, all the clientele were old sad bastards who sat around looking smug when they had nothing to be smug about, in short, they irritated me.  The staff seemed to be in a band, two young men with long hair and pale complexions, not looking like they'd had to shave yet.  They were friendly though, and asked us why we were here, mentioned the whole "not opening at 11am" thing!  Best thing, one of the ales, called Wild Boar, was £1.50 a pint.  I've never seen Tom jump in to buy a round before, and I don't suspect I will again.  Free blackcurrant too, £3 a round!  This was stingy round buying and there needed to be karma.  There was.  I described the two lads working behind the bar, well as Tom paid, he said "thanks love!" to my immense surprise, later admitting he thought it was a girl but being in South Yorkshire, hoping anyone can call anyone "love".  Hmmm, think he just about got out of it!  "Are you going to put that story in your blog?" he asked me with wide desperate searching eyes.  "Honestly Tom, would I do that to you?"  Considering he'd recently been told off by Christine for calling women "love" made it all the more fun.  And am glad I had that tale to tell cos the pub was an anti-climax to me, the exterior, tiling etc seemed to promise another White Lion or Shakespeare, but it felt a bit too purple velvety modern within.


Now the nerves were really jangling, as we crossed the road again to the Wellington.  The only pub I have failed THREE times to get into.  First, with Dad on 8th December 2004.  Nearly 13 years ago, but we found it closed 5pm on a Tuesday evening.  It had a different name then, something about a cat I think.  We both thought it looked like a good one.  In summer 2015, I was on the train for midweek BRAPA when I double checked to Whatpub only to see it actually (still) didn't open on a Tuesday.  And then last year, when I made it on a Wednesday, only to see a sign in window and a miserable old man told me it was being taken over and would open in three months time!  I admit I was delighted to see it out of the 2017 GBG, presumably for this reason.

But this is 2018 (so to speak) and it's back, so imagine my nerves when we saw a very shut door on the main road.  But we turned a corner and hey presto, we were in!  I could've cried.

And wasn't it worth the wait?  One of those Sheffield classics I'd been expecting the Ship to be like.  Corridor entrance, tiles, side rooms, you know the type, those you sometimes see in the West Midlands and the less annoying parts of Greater Manchester, but are rare anywhere else these days, well apart from maybe Sheffield  Grove in Leeds is probably quite like it, oh the Swan in York.  Anyway, you get the idea!  The barman was a solemn chap, first I thought unfriendly but then I realised quiet and effective, tracksuit bottoms in case he needed to change a barrel quickly, and a good full beard so even Tom wouldn't call him 'love' or blow him a kiss or anything (sorry Tom, I'll stop now).  We had to open a door to the side room to the left, and we chose well.  Two old blokes glared up at us, it was a bit like being in a library, but we were allowed to talk without anyone getting too cross, almost like it was a 'public' house or something.  Average age of customer approx 90.  Ales were amazing (SBS A-) and let's just say it took all our willpower to get ourselves up and off to the game!  One of those where the below pics tell a better story than me blathering on .....

And that is part one for you.  Part two in next few days, though am BRAPping tomorrow, am out Wednesday too for a bit of pre-emptive L**ds fun, and then we can hopefully get part 2 out on Thursday evening.

We got to Bramall Lane on time, best atmos ever in that ground on back row of lower tier, and as the ref blew for half time, we were amazingly 1-0 up against the odds.  Could we hold on?  Could I get my remaining 3 Sheffield pubs after the game?  And why should I have been in York all along?  Stay tuned to find out the answer to these questions.