BRAPA - Briefly in Keighley, and whatever rhymes with Bingley

The new Good Beer Guide will have been released by the time you read this.  But not when I visited these pubs, so I should start by saying that when that ghostly Dick Turpin character slipped me that bit of paper amongst the lemons in Sainsburys, the words "Keighley" and "Wetherspoons" were the most frightening.

Keighley isn't the kind of place where you feel the warm Lenor scented hug of strangers, or bunny rabbits frollicking in the meadows.  And I'd already been traumatised by that worst of trains EVER, the dreaded 17:24 L**ds to Skipton, which despite it's 5 billion carriages, is utterly heaving, and having random businessman's crotch thrust into my face at Shipley didn't suggest an easy evening ahead.

Roadworks meant the pedestrian lights weren't functioning outside the pub, but I wasn't put out of my misery despite the best efforts of a smiley Asian lady in a 4x4, so into the pub I must go.....

So I teetered in expecting something grimmer than the time Nick Grimshaw bought me a bottle of Grimbergen in Grimsby before reading the Brothers Grimm to me whilst I grimaced.  But it was all rather tame.  Tamer than .... no, you can do that one!  The barmaid was efficient and pleasant, I'd remembered my 50p off Mudgie voucher today, but despite working in a bank, I was sure £2.15 less 50p was £1.75 so I totally messed up my change, and my attempts of a joke to rectify it were met with the disdain they deserved.  The pub was actually huge (it was once an entire row of shops!) but I tried to sit "where the action was", that is in amongst a load of typical 'Spoons codgers.  But they didn't care, or do much amusing.  One looked like he'd come from a YMCA tribute act, and apart from that, the most fascinating was Keighley's version of the Mona Lisa.  His eyes just followed you around the room, his head totally still at all times.  My ale (Rye Mild) was top quality, which I silently dedicated to pub ticking legend Alan Winfield who'd suffered some unfair criticism IMO the previous day re his blog for daring to tell it like it is.  #PubTickersUnite!  And nothing else happened of note.

The train from Keighley to Bingley was so serene, it was almost a joy.

I never seem to have to walk more than about two minutes from Bingley station to the pub, so when my Spanish buddy Rocio tells me "it's a nice place", I must believe her.  Unlike Keighley, where I'd previously "finished" West Yorkshire back in March, I'd not been to Bingley since a dark winter's night in October 2014.

The pub reared up in an amusing Micropub kind of a way, you could tell it was quirky immediately. 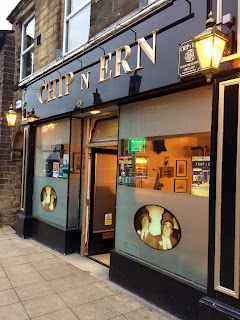 One of those "a little bit more than your average micropub", it certainly had more scope than some of those Southport types I visited on Saturday.  It was obviously "bring your own instruments" evening, and as I entered, a trio turned to smile at me, and the girl singer immediately told Mr Banjo and Mr Guitar to start playing "Personal Jesus".  Now I know BRAPA is good, but that's my fave dedication yet!  The barman was a sturdy unmovable proper pub bloke, and he wasn't going to move himself to make my life easier in terms of getting served, so I had to shout my order over a load of old codgers, and walk the codger perimeter, which involved tripping over a (admittedly nice) dog to get to my pint!  My pint tasted strong, was called Raven, no idea what it was really, just something dark brown which would take approx 27.5 mins to drink if I nursed it.  The nice dog was interestingly sat in the EXACT same place the dogs in the Grasshopper and the Barrel were on Saturday, my micropub bingo card is evolving!  The trio of "musicians" were now playing "Creep" by Radiohead, the dog's ears said it all.  She didn't have much a voice, they were better when they did "gang vocals".  I then took a walk down "Gin Lush Ave" to the bogs, surprisingly some stairs.  Even more surprisingly, a stained glass window on the stairs.  Even more surprisingly, a separate room with little bar upstairs in darkness, all deserted.  Wow!  Your micro-purist (if they exist) may not approve.  Back downstairs, two more blokes had come in brandishing acoustic guitars.  Girl singer says "We do this next one in A, G and C Minor .... but not the way I sing it!"  (you don't have to tell me, luv).  And just as I was 'packing up', barman comes over to apologise to me.  "Why?" I asked, and told him it was a great pint.  "I've just had to eject those two guys, they came in hammered, and asked for the strongest drink we had!"  Woah.  Firstly, I'm supposed to be observing these things .... HOW DID I NOT NOTICE?!  Secondly, why just apologise to me?  Just cos I have a green highlighter, a big book and a judgey expression.  Okay, so yes that's probably it!

Back in York well before 9, enjoying these West Yorks days before we have to start getting 'further flung' again.  Only nine WY pubs to go.

Blogs will start having numbers next to the pubs again from Saturday onwards, we are back to the west of Cheshire and beyond, aiming for six more little beauties which hopefully all stay in the GBG til the year 2042.

See you on Sunday,