I can't say I'm a fan of the L**ds to Manchester Victoria train.  Places that were once a picturesque novelty (Sowerby Bridge, Mytholmroyd etc) are now irritating Yorkshire towns delaying my Greater Manchester progress.  An hour and 51 minutes later, I was at Mills Hill, a station so named because presumably Chadderton is considered too embarrassing to have it's name assigned to anything.  Ouch!  Either that or Mills Hill actually exists.

Ah, Mini Cheddars.  I remember back to Didsbury's Fletcher Moss and hearing some animated discussion on this lovely little crisp (and don't start claiming they are 'baked snacks' etc cos it ruins the narrative, got it?)  It transpired they'd released 3 new flavours.  Perfect night to try them all - after all, I did take some Oral B mouthwash to the pub in Thoralby.  First up was Red Leicester, tangy, stronger than original, a nice bite to them: 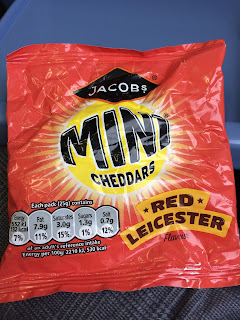 After observing a lovely Pretty Hagrid-esque Rochdale girl falling out with her boyfriend on his insistence on getting a taxi instead of a bus, I found myself with a boring half an hour walk ahead of me along a depressing main road in the muggy evening air.

The deeper I got into the bowels of Chadderton, the more of a sense of foreboding I got about my first pub, tucked away off the road close to several housing estates full of dangerous dogs and evil twilds enjoying their summer holidays with toothless uncles.  The pub entrance didn't let me down:

"Hello!" I tried to feign confidence as a mean looking bald landlord and three old locals turned to look at their first unknown visitor for half a century.  Sadly, my voice didn't come out properly, and I received a slight nod of head and flicker of eyes from the assembled crowd.  I hastily ordered the first handpulled beer (of two) I could see, and paid in exact change in an attempt to ingratiate myself.  Luckily, the four of them were glued to 'Eggheads' and the most responsive man (a Geordie with ginger beard but white hair) knew where Shaun the Sheep lived.  This calmed me down, and as I walked off to a table with my pint, I congratulated him on his expert knowledge.  Sadly, I got a bit too confident and when a contestant thought Loftus Road was near Holbeck instead of Bellend Road, I told him I was fuming.  But he hadn't known either, so I had to remind him of Shaun the Sheep again to keep in the good books, especially as he'd lost his lighter and was getting a bit fidgetty.  The pub was a vast sprawling wild westy style thing, very estatey GMR pub if you had to imagine one.  I liked it's basic total lack of pretension.  A dying breed.  My beer was going down 'okay', not pulling up any trees but drinkable and fine.  So imagine my surprise when the so far watchful and relatively stern landlord comes up to me with a fresh pint of Millstone Tiger Rut, new barrel, to drink instead! I was moved.  I asked if he thought what I was drinking was off, he just murmured something this being new on and better, I reassured him there was nothing wrong with the other.  So what had motivated this sudden kindness?  I had no BRAPA paraphernalia on display (not that this'd have made any impact here) so I can only assume that in my sly "take photos of pub n locals, disguising it as photographing pint" ritual, that they decided I was some harsh beer inspector.  I guess they could've just been offering great customer service, but it felt like something more.  Five mins into my new pint (stunning quality btw), I shouted across pub this was amazing, not that there'd been anything wrong with other (which incidentally now tasted a bit dodgy by comparison) and he and our Geordie mate exchanged knowing smiles.  Hmmmm.  I drank both, by which time both these characters had left.  Strange but ultimately pleasing experience, and I hope, for my efforts alone, this is still in 2018 GBG!


So another fairly drab 30 minute walk back towards the station, where my other pub for tonight lay, just around the corner.  Plenty of time to build it up in my mind, it was JW Lees so I was obviously picturing the likes of Blue Pits at Castleton.

But as it came into view, I was struck by a slightly modern look, not helped as some cackling women were sat at the end of a plasticy garden area drinking Prosecco (I assume) and looking at a canal as if it made them in some way better than your average Chadderton resident. 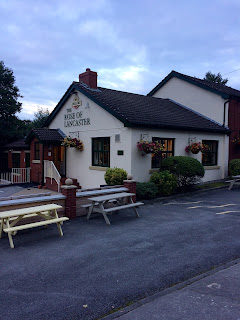 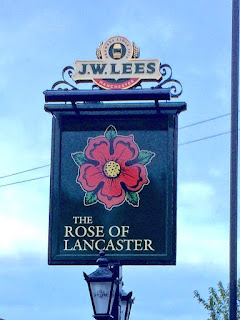 And the scene I'd half been dreading came to fruition inside as a gaggle of giggly barmaids flapped around in uniforms trying to look useful.  One was even behind a desk answering a phone, awkwardly taking a booking, it was her first time on this job and it reminded another barmaid of her first time on the phones, where something embarrassing happened which she wouldn't repeat until all the customers were out of earshot.  Not even my BRAPA listening device could pick it up, so we'll just have to assume it involved a whisk and a stick of celery.   At least there was interest on the ale front as I saw a red ale 'collaboration' (shit beer terminology) between JW Lees and Cloudwater.  Wow!  I joke about a Sam Smith / Brewdog link up, so I had to have this, though I'll probably get in trouble for comparing Brewdog to Cloudwater as people get a bit precious about the latter, mainly cos they are from Manchester and not Camden Town.  Annoyingly, the beer was amazing.  (You see how dull this pub is I'm padding out the blog with beer talk).  A porn star version of David Seaman looked lost, 2 girls hovered in the corridor looking scared.  Saviour came in the form of "The Vault" (which I hear from someone curmudgeonly is a Manc term for a good pub room), a back room with 4 middle aged men who said "ow do" and talked in proper Lancs accents (they way they pronounced Barcelona was beautiful), as I looked for the loo, so I did a circular tour of the pub, grabbed my ale, and hid in the darkest depths of the "Vault".  This was partly so I didn't have to watch the "Caribou" Cup (as one bloke called it), and secondly so I could sneak my Stilton Mini Cheddars as there was much food going on.  Incidentally, mini 'Cheddar' Evans was making 'his second Sheff Utd debut' to add to the theme.  The Vault was a damn sight better than the front room, but I didn't really 'feel' this pub.  Did I enjoy the Crown Inn more?  Well yes I did, despite it's fair share of short comings.  You'd not get a free pint brought to you in here, and that's a BRAPA promise.  Pub ticking is a weird business.


The train back was absolutely packed, most got off at Rochdale so there must've been some event on but no idea what it could've been.  All that was left to do was to tuck into my final pack of Mini Cheddars - "smoked applewood", very tasty, and they were gone quicker than someone escaping down the fire exit of a Rhyl Travelodge.

Anyway ....... I had to run for the connection to York in L**ds but made it, but still wasn't home having tea til 11pm despite having left at 4pm.  I think I overstretched myself really, and will try and be more sensible in the future, perhaps.

It's the BRAPA AGM on Friday so stay tuned for that self-indulgent write up, then back off on our travels to Cheshire on Saturday.  Could the GBG arrive as soon as this Friday?  Surely not.