If you think about life from an alphabetical BRAPA point of view, Derbyshire is coming into focus (well, to the same degree of focus my eyes had at 11pm last night).  Cambridgeshire will become the new Buckinghamshire in early 2018, Cheshire is going steadily well, Cornwall will be a once a year 'treat' (unless I move!) and Cumbria is well, just too terrifying to consider sober.

So we turn to the Sunday before last, and an evening gig & overnight stop in Derby was just too good an opportunity not to get a few 'ticks' in.  After rubbing shoulders with a few members of the purple rinse brigade and zimmerframers on the "V3 Villager", I walked from one lovely village, Repton, to another, Milton.  I wish all roads had paths set back off the road for pedestrians, my life never felt endangered once!

Great weather again, and there was some village hall event going on, full of cyclists blocking the road and middle aged poshos walking around with homemade flapjacks and mead, and twilds attached to balloons.  The pub was a refuge. 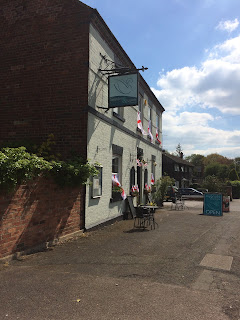 "...YOU LITTLE SHIT!" were the first words that greeted me on arrival, a standard BRAPA greeting I suppose, though I'm not sure the bloke was really talking to me, still I'd identified the pub "character" within seconds.  "There's only one Welsh band when all said and done!" he then declared.  I'll let you guess who this was, but let's just say his behaviour was quite manic.  "AND DON'T GET ME STARTED ON BIKERS!" he growled to his terrified three 'friends', though this latter comment proved particularly popular with every single local who entered and said the same thing.  "I'M GOING HOME NOW SO THIS PUB WILL BE QUIETER!" he squawked to much relief from all.  This was a cracking little local, everything a village pub should be with piano, normal decor, and no sign of food.  I got chatting with the barman, a quiet but friendly chap, quite a deep earnest St George's Day chat, I mean I'd only told him I was enjoying the Leatherbritches ale so he would ask me about BRAPA, so I could bore him for a few minutes!   You know that embarrassing moment when family walk in and you can't work out which is mother and which is daughter?  They weren't a very popular family in any case due to their tell-tale lycra cyclist scum give-away.  Turns out they were both daughters, I know this because 'Dad' downed half a Carling at the bar and asked for a top up on the sly.  "You've just done that so Mum won't know!" admonished the daughters.  More locals came in, one angry lady observed "all cyclists are fascists!", jeez, change the record guys, I think this pub needs a group outing to Cambridge if they wanna feel full on cyclist rage!!  Cracking pub. 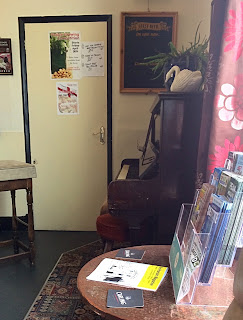 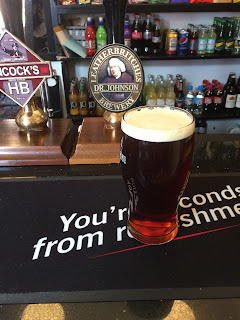 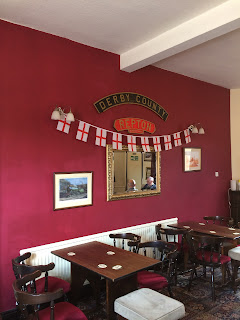 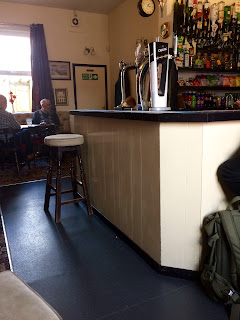 After a gentle stroll back to Repton (buses were every two hours so I had ages), it was time for pub two which apparently had descended into Fawlty Towers standards before the most recent takeover, according to the folk of Milton, with one overnight visitor forced to sleep in his car cos he got locked out! 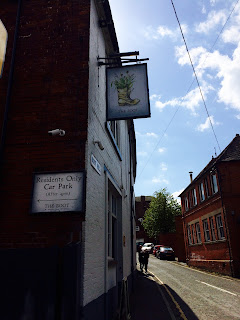 On the face of it, this should have been one to get the BRAPA blood boiling.  Let's consider the evidence. Gently perfumed pub air, lit candles on every table despite the bright sunny day, middle of the road piped music, no beermats.  Yet, whilst it was all rather twee, you could feel the quality too.  An onsite brewery offered good interesting ales, barstaff were courteous if a bit overly groomed, and there was fun to be had in the loos too, even a sense of danger as the 'toilet flushing chain' (always satisfying) had a meat hook on the end to draw blood.  If that wasn't enough, the first hand dryer I've ever seen with a countdown on it.  From 10-zero, yet when it gets to zero, it carries on anyway, just flashing menacingly at you, much like the men-folk in the York Arms (allegedly).  What's the point?
A group of young ladies arrived for some posh cocktails, and you know how middle-of-the-road a pub is when the Corrs come on, and the whole pub stops talking to have a gentle sing-a-long.  Good heavens!  But the hero of the hour was a Scotsman, who defied conventions and seemed to be on a Tinder date with a local lady.  He talked horse shit (literally), farming in Ballater(?) and going to the chemist, which he made sound like a pub, and probably was when he declared "I don't take drink to feel better, I take drink to numb the pain".  Fair to say, there won't be a second date.  In fact, when a tanned white toothed sweater man came in with black Labrador called Brocket, Brocket ran over to Mrs Tinder and got lots more attention.  Scotsman, defeated, had a chat with me at the bar instead!  Nice guy, and Mrs Tinder looked at me like "you can have him if you want!"  Hmmmm,  I had a bus to catch. 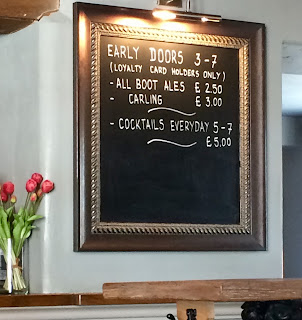 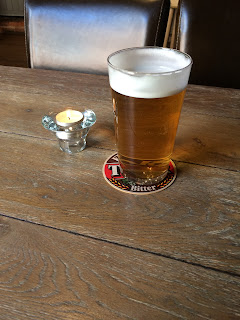 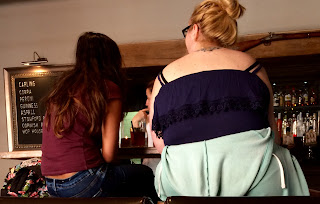 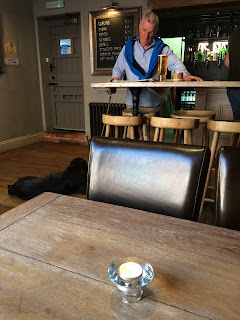 Bus back into Derby, checked into the Premier Inn, and straight back out cos although the gig starting time had been amended from 7pm to 6pm, which was odd, I needed to squeeze at least one of my two remaining pubs in.  My original plan had been to go to the Rowditch (annoying opening hours of 7pm-11pm) so my plan now was to fit that in before last orders and do the New Zealand Arms now.  Would it work?  Luckily, the venue (called "The Venue" in typical East Midlands imagination) was on the right side of town for both pubs! 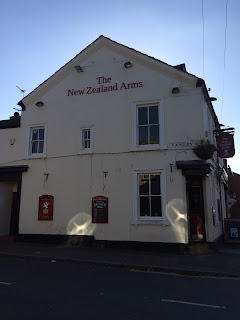 Ah, it was that traditional Derby pub welcome of slightly reserved, wary look in the eyes of barstaff, whilst the old locals close ranks around the bar.  To be fair though, there regular clientele probably don't come in with spiky hair, tie-dyed red and black jeans with ripped knees, a teenage genocide top and fake leather jacket from Hong Kong!  But I do.  And that ladies and gentlemen, is why I didn't get anywhere near the Dancing Duck ales and had to make do with the three in the 'Cider Bar', but a lovely non Cidery pint it was, best of the day.  It was a typically Sunday evening hubbub, so relaxed I was almost horizontal on my bench seating.  A Dad and Daughter combo appeared and made quite an odd duo.  He was of the nervy Uni Professor ilk, she was a student way-too-cool for-school.  I'd been getting myself more and more wound up by the old duffers blocking off the Dancing Duck Ales, and there's only so many Canadian support acts you can watch, so I thought (accidentally out loud combined with a yawn) "RIGHT, I'm staying for another one!"  The Prof jumped out of his skin but his daughter continued to Snapchat her Bae (or whatever students do these days).  The locals didn't let me near the guest ones, but I muscled in for a standard pale.  So another Derby pub that was almost a classic, but just fell short mainly on account of strange stand-offish attitude.  Furnace meets Exeter Arms meets Peacock etc etc etc.


So, then to the gig, a Venue living in the dark ages beerwise with keg Speckled Hen or soily Guinness the main choices, but the Menzingers were amazing, and the Flatliners deserved a lot more than a disinterested crowd (apart from me and one hairy dude who kept hugging me).  I once almost got in trouble for describing the Menzies (circa 2013) as "like watching your disabled son at school sports day" but since their amazing new album 'After the Party', they are more like Pistorious on Acid, minus the toilet-door murdering, obviously.  Stunning,  Hit after hit.

Even with the encore taken into account, the gig finished dead on 10:15pm so I raced 10 minutes down the road to the Rowditch in a last 'ditch' attempt to finish Derby, and get this one done. 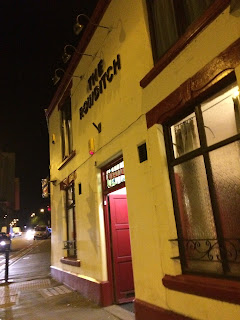 First step, lights were on and door was open - good!  Next, had they rung for last orders?  No chance, a band was in full swing and the place was heaving in a merry jovial way, this was the perfect tonic to many community pubs.  They even had their own ales so must have a brewery onsite ala Repton.  Cheap too, sure I paid about £2.50 a pint, and though any band would be a come down after the gig I'd been to, these guys were properly impressive - okay so it was the kind of pub covers you'd expect but feel the passion and power, had my gig-face on so had a bit of a boogie, got talking to this middle aged couple (or was it one woman, my memory is hazy!) about BRAPA (what else?) and she was really championing this pub for it's community feel, and she was right, shame I wasn't sober enough to remember more distinct details but I can tell you it must be one of Derby's finest.

So all in all, a fantastic trip out, decent sleep though a bit dehydrated, but Monday a much needed recovery day before I cracked on with Bucks on Tuesday afternoon.  Review of that coming soon!