Having successfully dodged the demonic combination of Christmas shoppers and England rugby fans, I was at Windsor & Eton Central (why do they need a Riverside too, just greedy) before 11am so I had time to wander into my most frequented Windsor building, Boots, to buy some mouthwash.  This will have BRAPA relevance as we'll see in tomorrow's review .....

It didn't look like a pub, and if it wasn't for the blackboards outside, I'm sure I'd have walked past.  Inside, it all became clear as it was definitely a club, and when I answered the inquiring looks of Mrs Acre with a request for an 11am pint, it wasn't what she was expecting (no I'm not a lost tourist, no I'm not collecting for charity).  She gathered herself and offered me a CAMRA discount and I soon sat opposite an increasingly frustrated Mr Acre, wrestling with half a Christmas tree and 50 feet worth of lights and tinsel.  I admitted I felt guilty sitting here with a pint, watching (but not guilty enough to volunteer to help). He was relieved when a tanned white tooth barmaid arrived.  "JADE, WHERE HAVE YOU BEEN?  I MEAN, WHERE HAVE YOU BEEN?"  She was reluctant to be put in charge of tree decorating, but with "Message in a Bottle" playing, it's fair to say he'd sent an S.O.S. out.  A cheeky local man with the gaunt look of East Berkshire had spied some Party Poppers in amongst the tat,  and asked Jade if he could nick one, explaining he was going to "use it on an Arsenal fan later" which sounded unnecessarily violent but as we'll see later, wholly acceptable.  Amusing little club, and surprised but pleased that parallels to Wickersley's Cricket Club could be made.


It was the greatest taxi rip-off!  I was well chuffed finding a taxi outside Windsor Castle to take me to Moneyrow Green, and the guy's sheer enthusiasm for BRAPA, hatred of Aussie sportsmen's lack of self-deprication and his Skipton relatives couldn't shake the feeling, WE WERE GOING THE WRONG WAY!  Not directly anyway, this dude lives at Bray, he must know the area.  A308 and turn left at Holyport is what I'd do, no chance, we were heading out Cranbourne way!  Utter shite,  He knew I knew and to stop the ensuing awkwardness, he turned off the meter at £20 when he actually did get lost!  Lack of meter was probably a tell-tale sign.

My taxi driver should have come to buy me a drink, as our barmaid was at least half Aussie and told me I'd be comfier in the right hand room where there were settees and a fire.  What she didn't tell me was this meant walking through the carpark with my pint to get there, but I kind of like pubs where you have to do this, feels proper, ya know, Tickhill style.  Her little helper seemed a quirky jolly lass too ("my family are all in showbiz, do you want to hear my Scouse/Welsh accent?" err no luv), whilst an old man kept the conversation going by stoking up Eng v Aus rugby hostilities.  Our barmaid meanwhile, told a story about realising British Airways don't do direct flights to Melbourne, so she'd complained to them that this was unacceptable, which seemed amusing to me in an arrogant way.  What with the board games, overly red decor and bar billiards, the pub only really needed a carpet and some Summer Lightning and it would have been quite Hop Leaf in Reading, but the lack of beermats meant this pub was veering perilously close to rural Berkshire blandness - managing to stay on the right side, which was nice to see as the Curridge's, Theale's and Aldermaston's of this world can get you down after a while.


A 12:53 bus was on hand to only rip me off £4 to take me the few minutes to Warfield, ugh, maybe I should have walked (everywhere!) but the lack of pavements looked 'harrowing'. 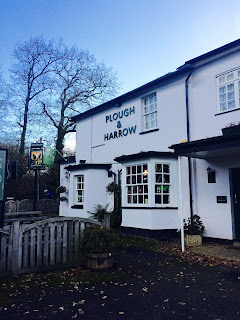 A cacophony of multi-coloured screaming tinsel hanging from every conceivable part of the ceiling was the first thing to greet me.  Next was the equally bright couple who ran the pub - it was like the whole experience had my drink spiked with "happy pills".  I was so taken unawares, I did a rare "try before you buy" on a surprisingly nice wintry Greene King guest, a poor local having to move out of my way at the bar, which he did theatrically back-stepping 5 paces to the wall, and then I made him direct me to the loos as punishment for being a martyr.  He must've hated me.  Excellent.  The bar was heaving with eggs, a nice nod towards the rural pub experience of old, though it was a bit unconvincing as the pub was full of bumbling posh upper-middle class fools.  "Oooh this is very civilised!" said the most irritating woman on a table of four near me as I hunched over a window seat trying my best to be miserable in the face of too much joy.  The table were soon arguing whether the 'venison' was in pie or sausage form, so Mr P&H appeared from nowhere to re-explain the menu to the old duffers.  He then brought them free calamari.  "Not rubbery like you were expecting IS IT?" he said accusingly.  "Our fish n chips are great - fish caught at night on 24 hour boats, actually, large vessels, the top Michelin chefs use the same as us, but WE used them before they got famous, a few delays at sea because of the weather recently".  As I spluttered "bullshit" into the remnants of my GK, I realised that I needed a brisk walk into Bracknell to clear my head of this madness.


As if Bracknell wasn't a debilitating enough town to be in (despite it's 24 hour smell of baked bread which is the highpoint), the trains were all delayed and the station was heaving with lost souls.  An American tourist girl asked where the waiting room was, she was laughed out of the place.  I crossed the road for a "hopefully pre-emptive" tick called the Goose - where the Adnams Ghost Ship was excellent quality but the locals were rough A.F.  Standing room only so I stood near some guys to feign interest in the rugby, being the kind of pub where"keeping your eyes on a screen, any screen" seemed like a safe bet.  "Boo!" said one man next to me.  "Alright mate?" I replied, to which he eyeballed me and stormed off to talk a toothless chav outside the loo about his failing love life.  Weird.

I'd been doing so well for time, and with me back on the 9pm to York, it was probably a good thing that I'd been slowed down but after more delays and confusion in Wokingham, and half a mind to abandon Sandhurst for the day, I ploughed on, revitalised after about 8 cheesestrings and a chat with a posh old lady about BRAPA (always the most baffled audience).

Homely warm atmosphere, lots of smiling faces, a blonde barmaid making a "frothy head" comment, I ordered an ale with a Brazilian name which I'll never remember - anyway I could see why this pub has won awards, it was worth the wait.  I turn round to locate a seat for I'd spied a raised area, but I was amazed by what I saw!  A Winter Wonderland, Tim Burton style, of skeletons, skulls, B-movie horror posters, all cocooned in blue fairy lights, snowflakes hanging from the ceiling, fake cobwebs, it was quite a sight for sore eyes.  Now whether they couldn't be arsed to take their Hallowe'en decorations down, or whether they were bored of the twee cliched Xmas decor, this certainly left an impression.  I felt like I was drinking in an enchanted forest, I'm sure an owl hooted and a black cat screeched at me.  Maybe it was too much beer.  Whatever, a twild was only three tables away but his yelps were rendered useless as the decor muffled his voice, and the lights incapacitated him.  Great stuff, can we have this kind of thing all year round in every pub in York? 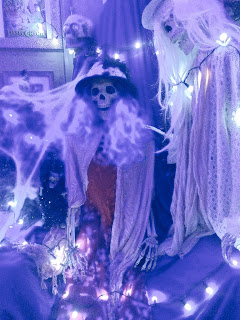 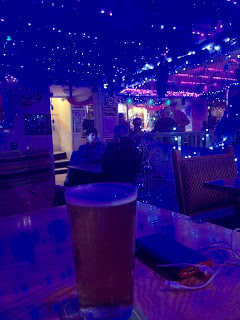 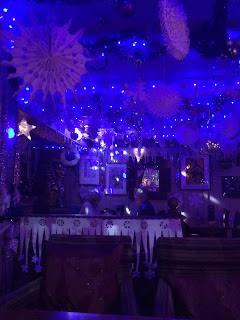 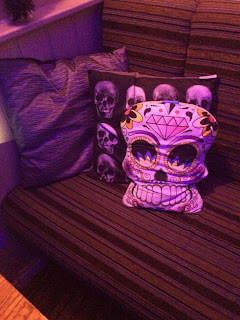 Back in London via Reading, I had more than enough time for my now traditional once a month Saturday evening disappointment.  I jumped off the Tube at Piccadilly Circus which was so busy, it was like errrm, errrm .....

Soho pubs and the Lyric theatre were nearby, so after 2 minutes stood outside composing myself, I decided to brave it.... 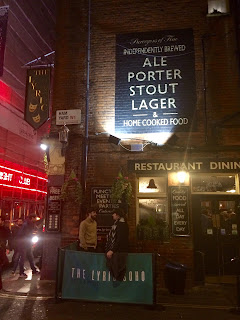 After seeing some stereotypical hipsters gently remonstrating with a doorman and eventually being convinced they were far too fragile for such a busy pub environment, I had a similar conversation with him, and he let me in "as a Christmas present".  Gosh, I hope it isn't the nicest prezzie I get this year!  No, to be fair, this was a rare positive experience.  The crowds, like doorman, seemed to be very accommodating in "pushing me to the bar", like how life would be if BRAPA was famous!  You could've been in an outer Bradford village for the attitude that the punters showed "eeee, get in there lad!"  I even had time to break off to help take the piss out of a student with the most horrendous pure nylon Christmas shirt that has ever been witnessed, I even gave it a stroke!  He was hounded out of the pub / or left of his own accord, am sure sparks were flying from everything he came into contact with.  My ale, Solaris Pale something bollocks was actually my favourite pint of the day, shame you couldn't swing a kitten in here.  I managed to perch between two stools near a screen showing West Ham v Arsenal.  No one was in the least bit interested until Arsenal scored 3 in 3 minutes and then every bearded tit starting "fan-girling" over Alexis Sanchez and I really really wished I'd picked up a few Party Poppers back in Windsor ....... everyone knows the Hammers defence is leakier than my bladder after 6 pints.


I had ages to wait at Kings Cross but with a 'North Yorks Chauffeur' day on Sunday, I had to be steady - and Parcel Yard was four deep at the bar anyway and it is quite rubbish sometimes so I got coffee, got on train early, tried to work out if the weirdo near me was from North Lincolnshire, played a train bingo game like my Ember Inns one, and was home for 11pm.

Only SIX Berkshire pubs to do, and most of them are in Reading!  Hooray, see you back there in the New Year.