G'day Cobbers, dunno if I mentioned I was flown Business Class to Melbourne for a week?  Oh I did?  Are you sure?

Bad news from a BRAPA point of view of course, but hardly grounds for complaint.  Time to take the kangaroo by the tail and make the best of it beer-wise, imagine a future Aussie Good Beer Guide, and try and get to the best places outside of the weird 6pm-1am working shift!

I'd just hit two goals as my Grimsby Town side beat Southend Utd 4-2 away in a 4th round FA Cup clash, when travel buddy Alanna popped her head over my seat and suggested we try out the Business Class bar.  Perfect time for a celebration!  Two small areas of leather bench seating surrounded a semi circular island bar, reminiscent of some of Edinburgh's finest (well, in the most plastic way possible) as I baulked at the lack of ale on offer and joined Alanna in the most disgusting Mojito cocktail ever made.  "I don't know how to make these" stated our terrifying 6 foot tall Russian beauty barmaid, "I won't be offended if you hate it - I have thick skin".  I lied that it was delicious, as I know Putin reads my blog.  Just as we were about to sit down, an old ginger colonel insisted on kneeling on the entire seat like some schoolboy with ADHD, getting excited by the clouds outside.  He later stole an entire platter of sandwiches off the bar, giggled, and ran back to his seat.  Proof that no matter what "pub" you are in, there's always one tosser.  We resorted to an embarrassing tourist photo session, our Russian friend made me have photos of me working behind the bar, I even had to pour a rich English businesswoman a real life glass of red wine.  She argued I hadn't filled it up enough, and made me go right to the brim!  Alanna suddenly went a bit green, I thought it was my pro-Eurovision rant,  but it turned out she had chest pains and thought she was having a heart attack (not that she's a drama queen or anything!) so in true BRAPA spirit, I was left alone in t'pub.   Next up, I went for a breakfast martini - this time served by the lovely Toma from Lithuania.  She had to raid the breakfast cupboard in search of a marmalade jar, needed to make said drink, and then persuaded me to have a strong measure just cos she wanted to finish off a bottle of gin, or something unconvincingly Eastern European.  I had to take it back to my seat as afternoon tea was being served!

For some reason, I was still buzzing when we arrived at the hotel 11:30pm on Saturday night despite the 14 hrs from Dubai.  It was straight to bed for Alanna, but as encouraged by our taxi driver, it'd be wrong not to see Melbourne on a Saturday night.  Quite a daunting experience, and as I dodged unconscious or puking Japanese girls on benches, a man shouting "walk away!"at a homeless girl (was he in Cast?), and 5 young Aussie lads singing something that sounded vaguely like Waltzing Matilda, I considered that this was a bit like a more welcoming version of Wokingham.  It was a good half hour trek to the pub, allowing for Melbourne's stupid road crossing system, and a bouncer (not the Neighbours dog) asked me if I was meeting friends here or what I was looking for?!  My "I've heard this place serves interesting beers, so I just want a drink, is that allowed?" stunned him into silence and I walked down a darkened staircase into this dimly red lit bar, bouncing with music that sounded very much like Kid Creole and the Coconuts on acid.  I was served by an incredible hipster with handle bar moustache, but he was ultra friendly and gave me so many tasters of 7% overly hopped beers, I almost didn't mind that my pint was 14 Aussie Dollars!  An equally friendly cockney barman had to help me identify exactly what I was drinking (something with carrot in!) and with two young Scotch men farting on my leg at the bar and a selection of 5 different types of beermat, I felt pretty much at home perched at the bar in the reddy gloom.  I was going to enjoy Melbourne. 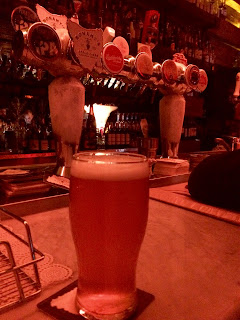 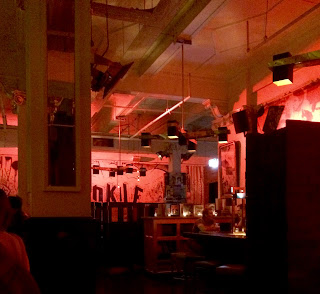 Sunday evening then, and after a day of top touristing, we were amazed to see that a torrential rainstorm had brought Melbourne to a stand still - EVERYWHERE WAS CLOSED.  Is this a thing in Melbourne on a Sunday?  It was very strange to us.  About my 5th choice on Google Maps, we stumbled in here but got lucky, as food was being served by an Australian Stephen Quinn,  and a few beers were on tap which weren't too boring.  We sat in a raised area and not for the first time this week, I tried to impress on Alanna the difference between a pub and a restaurant i.e. it is ok to go up to the bar, order your drinks and food there, open a tab,and wait.  Besides, service here was tardy to say the least and we'd have been waiting all evening.  Only a group of jokey students behind us seemed to get any proper service, and they were basically idiots.  Cottage pie seemed like the perfect comfort food for me, but the ultra thick layer of mozzarella combined with the richest red wine and guinness style middle was just too rich for any man with jet lag to enjoy.  Ugh.  Alanna felt a bit ill herself, but I (selfishly) made her stay so I could order a pint of each ale and work my way through the bar.  Any guilt feelings were short lived.  An old Irish wastrel kept wandering around as though in search of a seat/friend, but kept returning to the bar for another Guinness soon after.  The pub lacked warmth, and I'd have to say that whilst it did a job and felt 'pubby' to an extent, it was never going to win any awards for pub of the week! 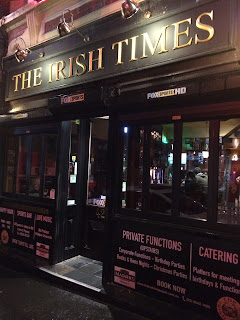 Monday dawned bright and sunny if a bit chilly, and after brekkie we hot footed on down to a Cat Cafe where we chilled with some waifs and strays but sadly no ale was available ......


It was time for lunch, in a "English themed" pub that had been recommended to us.  I'd bought my deer stalker for the occasion. 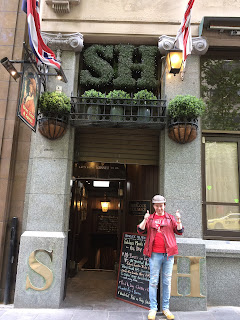 So the miserable old locals didn't appreciate my hat, but I'm British in a British themed pub so fuck 'em was my general attitude, made more vitriolic by having to persuade Alanna that we didn't have to sit in the shoehorned-cattle-restaurant area to eat, and the raised seating by the bar with a shitload of chips (in a hopelessly impractical wicker basket when it comes to gravy pouring) was a far better solution.  Staff were lovely too, the confused man with "pie of the day" concerns, and the homely landlady - plus there were some top Aussie beers on to save me braving the likes of London Pride and Hobgoblin, which I wasn't convinced would taste that good on keg.   But seriously, were the chips supposed to be a starter?  No way you could make inroads into them (well not with my sparrow like jet lagged appetite!).  It was a lovely pub though, one of the gems of the week - pubby, homely, warm, friendly, clean.  So much so, we came back here for dinner on our last day where I did a lot better with a corned beef hash covered in the most ridiculous mustard dressing ever.  You know I normally hate dining in pubs, well the rules are different in ARAPA before you say anything, so there!  On this occasion, we got chatting to a lovely couple from North Berwick who were on an Aussie tour.  At one point, a surfer dude came in and ordered what seemed to be a schooner of "chips" (crisps) and I had to overlook the fact that crisps are crisps and are served from the bag without any pouring required, but who can stay mad with a pub like this?


Monday night had been our first day at work, and knackered on Tuesday morning, we missed breakfast at our new "go to" place, so we had lunch there instead, meaning I could have a beer and review it for ARAPA - hurrah!

This place then, was almost perfect for us as breakfast venue - how many poached eggs did I eat over the week?  Is that a Martin Taylor style blog question?   Let's just say good job I bought a huge bag of prunes to even it out!  I say "almost perfect" because the staff were hilariously slow.  Whether it was seating us, serving us (especially drinks) or bringing us the bill, they were comedically woeful.  When we interacted with them, they were personable, funny and warm, so it seemed a strange discrepancy.  One young lad who realised we were regulars complained what a busy morning it was one day when we were the only customers, tending to "ghost" customers at imagined reserved tables, all the while neglecting the real life customers, us - so bizarre.  Ironically, it was on a busy Tuesday lunchtime that we got the best service, and i had an amazing bit of fish n chips with a pint of some mystery Monteith's beer from NZ which the waitress would not be drawn on, despite my "blood out of a stone" efforts.  The place, a former bank as you can guess by the name, drew obvious comparisons with a really clean and ornate Wetherspoons and still had old features, plus an upstairs walkway leading to guest rooms - would be interesting to stay here if I come to Melbs again!  Almost brilliant, they even had their own extra thick beermats, which I stole one as payback for the service.

So that was the first half of the week, I'll be back for the final 5  'ticks' I managed from Wednesday-Friday.

See you soon ya flamin' galahs.