Tuesday afternoon at work and I had that sudden compulsion that we all get at some stage of our lives, to 'randomly' visit the pubs of Barnsley that I'd not quite managed to do before.

After a train journey on the familiar 16:40 from DirtyL**ds, which was only notable for a power-dressing business woman slaying her own mother over the phone for not knowing where the bread was,  I was in the muggy town of the Tyke Monsters in good time.

I almost came here circa 2005/6, but deemed it "too close to the football ground" on a match day and likely to be heaving.  If you don't know which way you are walking from the station, it isn't an easy one to find, and as soon as I stepped inside the Alhambra shopping centre, Google Maps basically said "Si, you are on your own from here".  After side stepping some teenage chavs, I found myself being greeted by one man sat at a table in the middle of the pub, the landlord.  "Yes cock?!" he exclaimed, well I've never been so insulted!  Friendly Barnsley greeting I hope.  As the only customer present (brilliant at first, but soon depressing), I sat in the main bar enjoying my Old Mill guest ale (a brewery I usually find a bit crummy) admiring memorabilia from Barnsley F.C.'s "golden ages".  So 1910-11 and briefly in the mid 1990's then.  Toby Tyke kept staring at me in a foreboding manner, I had to remind myself I lived here in 1983 (town, not pub) and my great uncle played for the Tykes in the 1920's so I am virtually royalty.  My pictures might make the pub look ultra traditional, but it has suffered a massive stroke on the right hand side and is all a bit restauranty (well, dried flowers in small vases on wooden tables) and was this the reason for the emptiness?  Isolating old school drinkers, yet at the same time, hardly the most salubrious of eateries either?  Great ale though, told barman, called me "mate" this time as he hummed in a slightly mad, out-of-tune way to himself...... 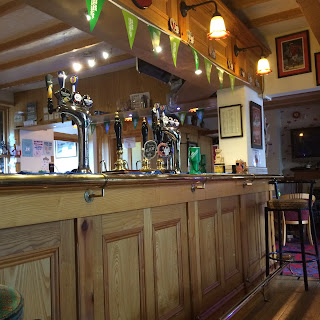 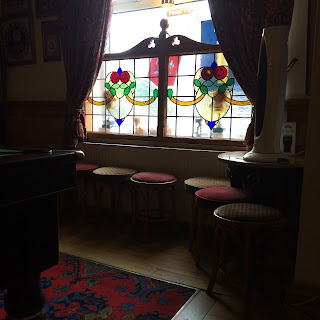 A 15 minute walk across town took me down Summer Lane, to a pub that myself and the redoubtable Tom Irvin tried to enter after 12 noon in July 2014, supposed to be open.  We even rang the pub phone number but nothing doing.  After some questionable theories, we settled on "pub closed forever" (it made me feel better) and returned, brows dripping with sweat, to the Old No 7 where Bernard Everitt was all like "why did you ever leave here in the first place?"

A proper local community spirit was brewing on this warm Tuesday evening with an occupied pool table and England U21's on a screen.  I was greeted as "luvvie" by a barmaid in a fetching black and white striped get-up, and was soon enjoying a typically amazing pint of Abbeydale Deception, choosing to sit "right in the heart of the action" rather than cower in the empty far corner room - after all, I needed blog material!   As friendly (and ever-so-slightly edgy) as this pub was, the main criticism has to be the amount of hypochondriacs that abound.  Firstly, barmaid herself.  "I'm ultra tired, definitely something wrong with me" she kept saying.  It didn't stop her getting animated at the slightest hint of excitement and told a tale of some drunk guy throwing a bucket of water on her last night.  He nearly got barred when he refused to get in a taxi and then demanded another pint.  This place must be fun at 11pm.  Then a neck-aching layabout girl entered and ordered much Prosecco, admitting she actually cried when the doctor refused to give her any medication.  She then sympathised with the chubbier pool player, he's been "laid up sick" all week - yet he was on his 5th bottle of Bud (since I'd arrived) and was racing around a pool table like a hairier but still more acceptable Stephen Lee.  Was I seeing the dark side of Barnsley society?  At least I got called "pal" for opening a door for a man with too many drinks and not enough balance, and then when Rashford scored for England U21's, they all nodded smugly in unison and went "aye, Rashford's got it, aye" as though he's a Barnsley born and bred regular.  Insane pub.

'Spoons time it was, armed with another Mudgie voucher to get the price down to £1.59 for a very good Horbury Beer.  Reason I've not been here before was that when I went to the other Spoons, I just didn't have the heart to do two in one day!  'Spoons pubs seem to have one of two entrance types - either, and most commonly, the light glass door, wide and bustling, greeted by tables at all angles as you fight your way to a bar straight ahead.  Or like this one, the narrow thin dark entrance with a few miserable locals lining the walls, where the pub slopes before sweeping round left or right to the bar.  All the drama here was at the bar where a horrid man from the West Country, having earlier admitted confusing the young barman with a complex order, then slagged him off to more senior staff "You need to train your staff better!"  "It's only his second shift!" protested the guy serving me,  "EXACTLY!" said West Country Twat, which was a comeback which made no sense to anyone who witnessed it.  Seriously, if I had a west country accent in Barnsley, I'd not be making a spectacle of myself.  As I sat down at a sticky table and brushed crumbs onto the floor, I wondered what the army of female skanks (oops, waitresses) were actually doing, well until the tiny strawberry blonde tanned one smiled at me, then I forgave them.  Upstairs was a huge seating area and another bar, the locals all looking at me like "this is an upstairs room for local people!"  Then, nothing else happened for the next half an hour. 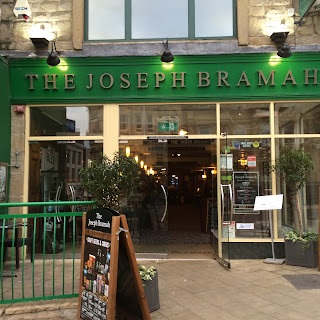 So that was nice, three more pubs errrm, not ticked off cos they aren't in the GBG just yet, but visited pre-emptively anyway.  Journey back nice and uneventful despite changing at L**ds again, and back on with cross-ticking my new GBG in readiness for 15th September.  I will be in Burnley on Saturday for some football and real ale, so will keep you posted.