My penultimate trip to Bedfordshire for pub ticking purposes (well, until September's GBG cross-ticking exercise at least) began with a third trip to Biggleswade, which makes it one of the most visited destinations so far.  Not bad for a happy well-heeled bustling market town where you might think real ale pubs aren't really the specialist subject.

It was pouring with rain but my familiarity with the centre of town meant I didn't even need a map to get me to my pub, approaching it down a side passage behind the marketplace.

Despite it's ever so slightly pretentious official moniker, this pub was already a hub of activity when I arrived dead on 11am, with breakfasters, drinkers and evil old women asking for hot drinks, all escaping the rain / Christmas shopping (delete as appropriate).  It took me a while to get the attention of the bar staff who were chatting with locals at the bar, the main character being a man with the croakiest voice ever witnessed on my pub travels, and hearing him sing Mumford and Sons down the phone to his grandson was both heartfelt and ridiculously amusing at the same time.  Despite the time, a 5% porter from Worksop felt like the only sensible thing to do, though the 'glass' I was served in definitely did not seem appropriate to what, at the end of the day, was an English ale.  Belgian 10%er, maybe so.  The barmaid (making a late push for "brunette barmaid of the year award") was ultra friendly and was soon over cleaning my table and replacing my candle because someone had apparently "robbed me", I'd never have known.  Not for the first time recently, I was in an unashamedly blatant Greene King local hero pub but the beer and atmos made it a strong contender for pub of the day, certainly the best Biggleswade pub since Golden Pheasant in my eyes.


It was time for a bus to Moggerhanger, where I believe I was about to become their first official tourist!  Typically of Bedfordshire busses, a diversion was needed around town and then the double loop deja vu at Sandy meant my bladder was straining by the time we finally reached the "Mogg".

"We are NOT a gastro pub", their official website proudly states.  So a bit confusing then to be greeted by a manically smiling young lady with pristine white shirt and menu clipboard, who almost proceeded to rugby tackle me as I simply made a b-line for the bar.  No wonder the only other drinker, a craggy old local Fosters only man, looked as bewildered as me.  To be fair, this was a cracking old building with low beams, uneven floor and a homely lived in sense.  Take away all the festive decor, and put me here on a Tuesday afternoon rather than a Saturday lunch before Christmas and I might have had a totally different experience.  The range was very Young's based, and a Winter Warmer at 5.5% meant I was certainly not going to stay too sober today.  It took a long time to get served, with the diners taking priority, the female gang of staff were all friendly, but seemed to eye me with a degree of suspicion as I sat in a twee 'reception' style area, all floral patterns and cushions.  A conversation within earshot revealed that not only had a couple gone out of the way to say how special their meal had been, but someone before had obviously complained and they were still reeling from it, stating "nice to see there's at least SOME decent people in the world!" which just scared me to be honest.  As a nice touch, instead of beermats (which would have been preferable), they had trivial pursuit cards so you could quiz and drink together,  Needless to say, I added a BRAPA card to the pack before leaving. 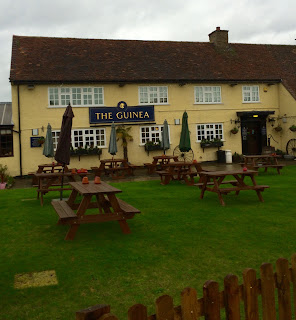 Still, if this had been a good slice of fortune, it was brutally evened up when the 14:07 train back towards Peterborough was cancelled.

This afforded me chance for a revisit of the Sir William Peel, Sandy and what a cracker this is.  If you remember, my summer visit was a bit of a whirlwind but now I got chance to enjoy it as a quiet indoor experience, where the landlady was chatting with an Irish guy called Brian, his local wife and their baby who loved Christmas lights.  The Oakham Citra was superb, so when a wedding finished and the men came in asking if Guinness was on, I could only shake my head in despair!  A bit more controversy followed as the baby pooed himself (possibly upset by the Guinness conundrum) and then Brian tried to put it in with the general pub waste as babies poo is milky and sweet.  Landlady didn't agree, but a wheely bin around the back provided the answer!

Phew, the next train was on time so I skipped St Neots in favour of Huntingdon, and a short taxi from here took me to the pretty little village of Hartford.

And what a uniquely shaped little gem this pub was, glad I made the effort to think a bit outside the pubby box.  An ancient 16th century jewel, I approached down some steps behind the bar and was met with a few smiling faces of customers and staff, always a good start.  The ales seemed interestingly micro, having broken the 'tied' shackles of Beds and now in the freer Cambridgeshire area, perhaps - Tydd Steam, I'd never heard of them!  The talk was about online dating, and let's just say the locals were of the age where it made absolutely no sense to them at all, so why discuss it at all I'm not sure.  From Plenty of Fish to Tindle (I think they meant Tinder), they had it covered, and it was interesting to see both a Geordie and a Scotsman at the heart of things.  This was my most contented moment of the day, I hadn't even noticed the giant Plasma screen showing Sky Sports News about an inch from my head.  A shame really because Dad told me Hull City were winning and I had spent ages on my phone wasting battery, trying to work out who'd scored. 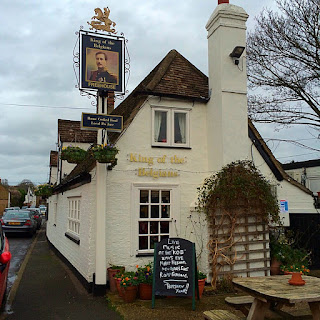 As dusk fell, at least it had dried up a bit which apparently wasn't the case oop North, and 15 minutes later I'd walked back to the edge of Huntingdon for pub number 4 of the day .....

Any "pub" that has to be approached by ascending some stone steps and turning a brass door knocker has surely got to be viewed with suspicion!  It reminded me of taking my old cat to the vets.  A vast multi roomed interior of kitchens and dining rooms awaited me, so I had to ask a helpful looking young waiter where the bar actually was!  Right at the bottom down some carpetted steps, I finally found it which was heaving with hysterical mainly female wine/coffee  drinkers.  The staff were on the ball though, and I'm sure the barman treated me with a certain reverence once I'd become the first person in ages to order beer, a Lone Star Red, from Nene Valley not too far away - it was as good a beer as I had all day.     A little table just at the top of the stairs was all that was free, but it served my purpose.  It was hard to take everything in with all the shouting, laughing and general merriment but a good atmosphere, though it made me feel maybe i'd been a bit churlish about the Guinea earlier on!

There was a theme developing in Huntingdon as I squeezed another one in before the train back towards Peterborough and then York.  I entered a grand entrance, only to be swarmed around by five young women (wish I was always this popular!) in what seemed to be a hotel lobbey.  Again, I asked where the bar was and one of them marched me down two staircases announcing "here it is, 12 handpulls on!" wow, well this was a bit unexpected but surely there's a more obvious entrance?  This place was again vast, with an olde worlde feel despite a recent refurb, and Oliver Cromwell used this pub as his recruitment post so I wonder what he'd have made of all the festive merriment in the main bar, probably would not have been too happy!  I deliberately ordered the most obscure beer  I could see, a "Nobby's Claridge Crystal" which I described as an awesome pale at the time but let's just say my memories were a bit hazy by now.

So that was that, the journey back went relatively smoothly and I am only three Bedfordshire pubs (Luton, Renhold and Salford) away from finishing that county.

HOWEVER, I sprained my ankle putting up some decorations this morning (fell off a chair!) and can hardly walk.  I really hope this doesn't impact Wednesday's trip to St John's Hotel, Hull or Saturday's trip to Rotherham but can't see me getting to work tomorrow, it'll need to heal quite quickly!  As a precautionary measure, I'm postponing the Stanbury midweeker until further notice.

Typical, you get through a Beds/Cambs big pub day unscathed an injure yourself at home!